Hydrogen fuel cell vehicles are considered as zero emission vehicles. These vehicles combine hydrogen fuel and oxygen from the air to produce water and electricity. The electricity is then used to power the electric motor which powers the vehicle. 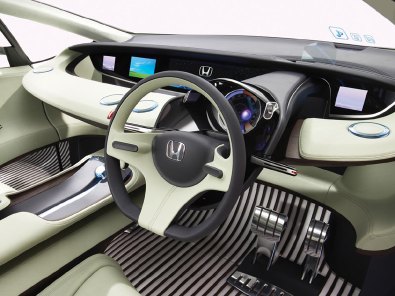 Honda motors has developed a concept fuel cell car called the “Honda FCX” which will become a limited production car in 2008. Honda has equipped the FCX with a fuel stack and an ultra capacitor along with high pressure hydrogen tanks. The fuel cell stack serves as the main power source while the ultra capacitor serves as the storage unit for supplemental power.

The Honda fuel stack consists of the PEMFC (Proton Exchange Membrane Fuel Cell) and has a total maximum output of 86kW. The water produced when hydrogen and oxygen are combined, is used in the humidification system. The fuel cell system is located under the floor and the high pressure hydrogen tanks are positioned under the rear seat. The ultra capacitor is positioned at an angle behind the rear seat to ensure that luggage space is not lost from the trunk.

The latest generation of Honda FCX is about two times more efficient than it’s hybrid counterparts. Honda has also redesigned the fuel cell stack to be V shaped to allow quick recovery of water generated during the electricity production. It is about 20 percent lighter and 30 percent smaller, while producing 14kW additional power. Honda has also added an auxillary litium ION battery.

The vehicle top speed is about 100 mph with a range of 354 miles on one tank. Large scale production of this car is limited by the number of hydrogen refuelling stations that will be built over the next few years. Overall, Honda seems to have made fantastic progress in building a highly energey efficient car of the future.

Jim Letap is the lead editor of Hybrid Auto Info which is an online portal providing information on the latest developments in the area of hybrid technologies. Please visit HybridAutoInfo.com for more details.