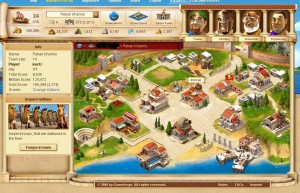 Ikariam is a newly released game by the german game company, GameForge. The company specializes in the coding and design of online browser games such as this one. The basis of the game are simple – build up your city and conquer the world. At the moment, other cities are not destroyable as that would mean one will loose everything he/ she has worked for but it has been announced that this will be changed in a future update.

Other games such as Popodopolous and Zeus worked on the same basis and their simplicity is what made them popular. Well, Ikariam has another popularity factor – the fact that you play it online, for free and without having to download anything on your computer. This feature is amazing as that means you can play it anywhere; at school, on the train, airport lounge or at home!

The game’s files which contain all your account details and statistics are stored on a central server at the company’s headquarters so you don’t have to worry about loosing your files.

Ikariam has only been released in February and it is one of the most searched terms on search engines such as Google and Yahoo. However, Ikariam is still in beta phase so there are a lot of bugs and missing information that you can only get from the developers if you ask on the forums – this can be time consuming as there isn’t a 24/7 customer support.

So, say you want to build a new colony or simply expand your palace and what to see what benefits you get. There’s nowhere to go apart from the forums as the game is recently released and a lack of documentation exists. There are numerous Ikariam videos in existence on YouTube talking about the high number of bugs in the game and how to fix them, but apart from that you have no other information.

Well, I have teamed up with two other website designers to bring you the Ikariam Tip website where we are adding new tools, sims, tutorials and guides daily as we progress through the game. We have started from 0 like every other player of the game just over a week ago and we are struggling to provide all the future new Ikariam players with strong information and documentation that is missing on the official Ikariam FAQ.

Tim Howard plays Ikariam on the Gamma server and he owns an Ikariam Tips website: http://ikariamtip.com

1. Greasemonkey scripts for Ikariam. Lots of.

2. To use the scripts, you need Greasemonkey for Firefox. Get it here.