What is the Apple iPad and How Much Does it Cost? 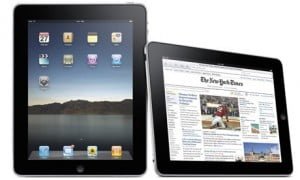 Everything Apple does causes a storm in the tech world, but if you’re just an Average Joe (or Jane), you may be wondering what all the hubbub is about. What’s the Apple Ipad (and do you want one)? Let’s take a quick look.

What is the iPad?

The iPad is essentially a portable entertainment system. It allows you to watch movies, read ebooks and news stories, play games, listen to music, and send email (wireless connection required). It’s sort of a souped up version of the iPod Touch, except with a significantly larger display. With it’s full-color 9.7-inch screen, it matches the size of the Amazon Kindle DX (one of the largest-screened ebook readers currently on the market). The iPad weighs 1.5 pounds and, according to Apple, has 10 hours of battery life (computer manufacturers tend to overrate these things, but surely you’ll have enough to get through a couple movies before needing to recharge).

The iPad can run most App Store apps, and its interface is similar to that of the iPhone, so it’ll be an easy tool to use if you already have some familiarity with Apple’s recent products (and even if you don’t, the touch-based interface is quite intuitive).

While the iPad isn’t supposed to be a replacement for your laptop, it does have an iWork application suite app (which includes Keynote for presentations, Numbers for spreadsheets, and Pages for word processing) that you can download. This will allow you to do some basic computer work on it. As with the iPhone, an on-screen keyboard appears if you need to type in text. With the bigger screen size, the “keys” should be a little easier to use than on the iPhone. The iWork app costs $10 and will be available in the iTunes App Store.

What can’t the iPad do?

The one thing the iPad isn’t is a cell phone. You can’t make calls on it, and you need to have a local wifi signal in order to access the Apple store (to download more ebooks, movies, music, games, etc.).

How much does the iPad cost?

The original iPad costs $499. According to Apple there will be an upgraded 3G-enabled iPad (meaning you’ll be able to access the internet the same way a cell phone with a web browser does) in a few months. That version will reputedly cost $629 and run $29.99 a month for 3G access (unlike with the iPhone, there won’t be a monthly service contract that you have to sign).

Now that you know what the iPad is, you’ll have to decide if it’s the right all-in-one entertainment gadget for you!

The author writes free stories for children and maintains the Writing for Your Wealth blog. If you enjoy writing, reading, or you’re just bored, stop by her sites and say hello.