The Samsung F480 has a dimension of 95.9 x 55 x 11.55 mm which can be compared to other handsets that has similar sized screen. What gives the Samsung F480 an expensive look is the metallic accent which is very sharp. The glossy plastic in its front panel can be sleek only when finger print smudges are not on the way. Originally, the Samsung F480 was planned to have two versions but then Samsung has decided to incorporate the two looks into one package. The Samsung F480 now has a leather case cover that is embedded to the back cover which gives you no option to remove it in any other way. 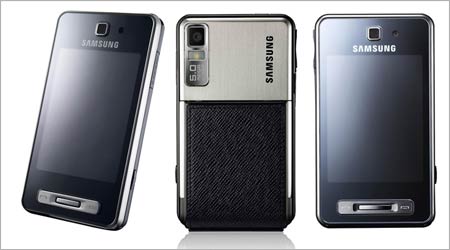 Its ergonomics is very good though it is not the best because it is quite small which makes it a little hard to hold most especially when you have large hands. There are only three keys in the front panel of the mobile phone which are the CALL, the END and CONFIRMATION key located in between of the two keys. The confirmation key displays the shortcut menus which is very helpful in switching from one task to the other.

The volume rocker located in the left side of the phone is not only used to adjust the volume but it is also used to resize the pages of a website like the Jog Wheel of LG Viewty. The USB port found in at the right side of the phone is used to charge, transfer files and connect headsets. Though, it is limited due to the fact that it cannot use any other headsets because of the port it uses. When talking about the dedicated key for the camera it is quite stiff and hard which you need to get use to.

At the top of the Samsung F480 phone you can find the hold button which is used to lock the phone to avoid unwanted presses though the screen is fingers-only sensitive.

If you are looking to get your hands on one of the mobile phone deals free gifts, then visit Best Mobile Contracts, the leading mobile phone comparison website. They will help you find a Samsung tocco contract that is right for you.

One thought on “Samsung F480 TOCCO – Design and Construction”