Rojak (Chinese: 囉喏; pinyin: luōrĕ) is a fruit and vegetable salad dish commonly found in Malaysia, Singapore and Indonesia (where it is called Rujak). The term “Rojak” is Malay for mixture, is also used as a colloquial expression for an eclectic mix, and in particular is often used to describe the multi-ethnic character of Malaysian and Singaporean society. 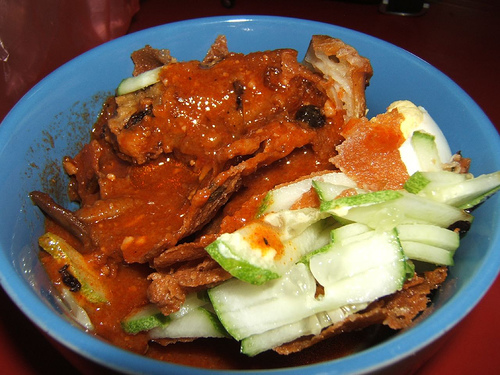 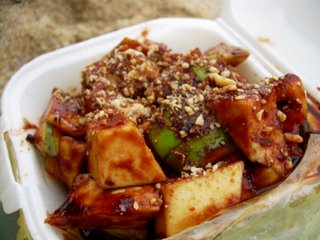 Fruit rojak consists typically of cucumber, pineapple, turnip (jicama), bean sprouts, taupok (puffed soya bean cake) and youtiao (fried dough fritters). Raw mangoes and green apples are less commonly used. The dressing is made up of water, belacan (shrimp paste), sugar, chili, and lime juice. Ingredients vary among vendors with some also using prawn paste, tamarind or black bean paste in the mix. The ingredients are cut into bite-sized portions and tossed in a bowl with the dressing and topped with chopped peanuts and a dash of ground or finely chopped bunga kantan (pink ginger bud). Penang Rojak is another type of Rojak found in Penang, Malaysia. It is similar to fruit rojak, but adds jambu air (Water apple), squid fritters and honey to the mixture.

In Indonesia, especially among Javanese, rujak is an essential part of the traditional prenatal ceremony called “Nujuh Bulanan” (literally: seventh month). Special rujak is made for this occasion, and later served to the mother to be and her guests (mostly her female friends). It is widely known that the sweet, spicy and sour tastes of rujak are adored by pregnant women. The recipe of rujak for this ceremony is similar to typical Indonesian fruit rujak, with the exceptions that the fruits are roughly shredded instead of thinly sliced, and the jeruk bali (grapefruit) is an essential ingredient. It is believed that if the rujak overall tastes sweet, the unborn would be a girl, and if it is spicy, the unborn baby is a boy. 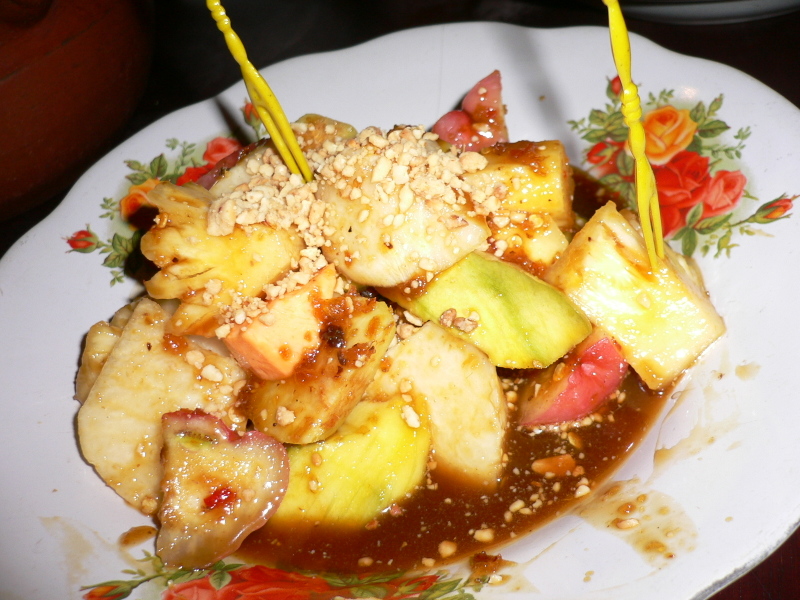 The typical Indonesian fruit rujak consists of slices of assorted tropical fruits such as jambu air (water apple), pineapple, raw mangoes, bangkoang (jicama), cucumber, kedondong, and raw red ubi jalar (sweet potato). Sometimes Malang variants of green apple, belimbing (star fruit), and jeruk Bali (grapefruit) are added. The sweet and spicy-hot bumbu rujak (dressing) is made up of water, gula jawa (coconut sugar), asem jawa (tamarind), grinded sauted peanuts, terasi (shrimp paste), salt, cabe rawit, and red chili. All of the fruits are sliced to bite-size, and put in the dish. The bumbu rujak or thick sweet spicy rujak dressing is poured on the fruit slices. An addition of sambal garam powder (simple mixture of salt and grinded red chilli) is put on side as the alternative for those who love a salty taste for their rujak.

Literary “pengantin” means bride/groom in Indonesia, this rujak is a reminiscent of Indonesia’s colonial cuisine. It contains slices of boiled eggs, potatoes, fried tofu, pineapple, carrot, bean sprout, pickles, chili, lettuce,cabbage, cucumber, emping crackers, roasted peanuts,peanut sauce and has a little vinegar to it.Some variants mixed the peanut sauce with mayonnaise. It is very similar to gado-gado, a humbler version of the dish.

Named after China’s most populated city, Shanghai. It’s quite popular among Indonesian Chinese community in Indonesia. This variant of rujak can be found in Indonesian Chinatowns such as Glodok, Jakarta. The same as Rujak Juhi, rujak Shanghai contains seafood. Boiled and sliced gurita (octopus) and teripang (sea cucumber) is served with kangkung (some kinds of water plant commonly used as vegetable), bengkoang, and served with thick red sweet and sour sauce, mixed with pineapple juice, chilli, and granule of sauted peanuts.