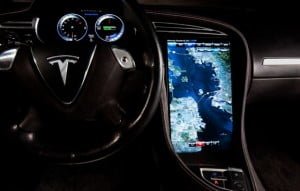 NVIDIA announced today that NVIDIA® Tegra™ processors will power the infotainment, navigation and instrument-cluster systems in the Tesla Model S, the first sedan built from the ground up as an electric vehicle. Built around the driver, the Model S is the premium sedan, evolved. Its infotainment system features a 17-inch touch-screen center console — the largest display ever in a car — providing vivid 3D graphics.

In addition to its unrivaled graphics capability, the Tegra processor provides exceptional energy efficiency, a critically important feature for electric cars. One processor will be used to power the infotainment and navigation systems, and another for the instrument cluster.

The infotainment and navigation systems feature:

CES 2011 attendees will be able to view the Model S outside the Las Vegas Convention Center in the Central Plaza, booth # CP7.