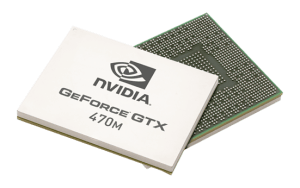 NVIDIA today introduced the NVIDIA® GeForce™ 400M series of graphics processing units (GPUs) — the building blocks for the next-generation of NVIDIA Optimus™ and NVIDIA 3D Vision™ notebooks that are coming onto the market from leading vendors, including Acer, Asus, Dell, Lenovo, Samsung and Toshiba, with others set to announce soon.

A critical component of the GeForce 400M Series is support for NVIDIA Optimus technology, which enables extra-long battery life by automatically switching on and off the GPU so that it runs only when needed. It has been described by reviewers as among the most important notebook technologies to come to market in recent years.(i)

The NVIDIA GeForce 400M series are the first notebook processors designed with NVIDIA’s Fermi architecture and built from the ground-up for Microsoft DirectX 11. They power notebooks with great battery life, and deliver the best high-definition (HD) experience, extensive Web browsing, immersive 3D and awesome gaming. With up to 5X faster HD video uploads to Facebook and up to 10X the game performance on the year’s top title StarCraft II(ii), GeForce, 400M GPUs are the ultimate notebook upgrade.

The GeForce 400M series is also able to deliver breathtaking stereoscopic 3D images for gamers, movie-lovers and photo enthusiasts when configured with NVIDIA 3D Vision glasses and a 3D display. 3D Vision supports the richest array of 3D content available, including over 425 games, Blu-ray 3D movies, photos and streaming Web video. Notebook models featuring the GeForce 400M series and NVIDIA 3D Vision glasses will be available soon after launch, including the Acer Aspire 5745DG with GeForce GT 425M and the Asus G53Jw with GeForce GTX 460M. In addition, by including support for NVIDIA 3DTV Play™, consumers can attach their notebook to a brand new 3D TV and enjoy all the latest 3D content including the hottest games in the comfort of their living room.

Only NVIDIA GeForce GPUs offer “Graphics Plus” features such as: