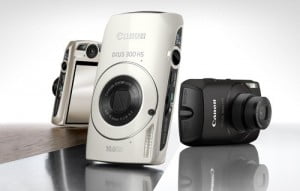 Canon today bolsters its luxury IXUS range with the launch of the incredible new IXUS 300 HS – a stylish and powerful premium compact digital camera capable of capturing outstanding stills and High Definition (HD) video. Available in blasted steel silver, matt black, glossy white or high gloss red, the new model offers a supercharged combination of speed, usability and creative control – making it perfect for those who wish to make a statement with the technology they own.

The IXUS 300 HS is the first model to feature Canon’s new HS System, combining a high-sensitivity 10.0 Megapixel CMOS sensor with fast DIGIC 4 processing for enhanced low light performance and high-speed shooting. A bright, f/2.0 wide-angle lens provides the ability to use faster shutter speeds and make subjects stand out by creatively blurring the background, while a range of manual settings offer a new level of artistic flexibility to IXUS users who wish to explore, and develop, their photographic skills.

Fast, powerful, versatile
The IXUS 300 HS embodies the latest in luxurious, high-performance, pocketable imaging technology from Canon. The new HS System provides excellent performance in low light, making the most of the camera’s back-illuminated CMOS imaging sensor and DIGIC 4 processor, supporting a maximum ISO of 3200 at full resolution and reducing noise levels at all ISO speeds [1]. Using Low Light mode, the camera can also achieve an extended maximum speed of ISO 6400, capturing images at 2.5MP resolution and providing the ideal tools for shooting at evening events and on nights out.

The camera’s low light performance is further enhanced by a bright, f/2.0, 28mm wide-angle lens with 3.8x optical zoom, helping users to get closer to the action while allowing more light to reach the sensor. Canon’s acclaimed optical Image Stabilizer (IS) minimises the blur associated with longer exposures when shooting in low light and when zooming in to get closer to subjects. Using advanced lens-shift technology, the IS allows users to shoot sharp images even with up to 1/8th of the light that would normally be required from cameras without stabilisation – equivalent to a 3-stop advantage.

The lens’ wide maximum aperture and its manually-controlled iris also provide users with greater control over depth of field, enabling the capture of impressive portraits and striking macro shots. This level of optical performance has been achieved using the same processes and quality standards used to manufacture Canon’s series of EF professional lenses, which are used and trusted by millions of users the world over.

The HS System also enables the CMOS sensor to capture high-speed action with up to 3.7 shots per second continuous shooting at full 10.0MP resolution, or up to 8.4 shots per second at 2.5MP resolution using the High Speed Burst mode. Both high-speed shooting modes have no limit on the number of shots taken and can be used non-stop right up to card capacity, ensuring that no critical moment will ever be missed [2].
Extreme, fast-paced action can also be recorded using Super Slow Motion Movie mode, which captures at 240 frames per second (fps) and plays back at a much slower 30fps, providing a dramatic and spectacular record of fast-moving subjects.

Unique Canon design – both inside and out
The IXUS 300 HS stands out from the crowd with an angular and compact stainless steel body, providing sleek looks to match the stunning image quality.

A 7.5 cm (3.0”) PureColor II G LCD screen incorporates a strong tempered glass outer layer, providing high contrast and wide-angle viewing that makes it ideal for shooting large groups or subjects from awkward angles. Its wide, 16:9 aspect ratio also allows users to frame and play back HD video footage in full screen without black borders at the top and bottom of the picture.

A touch-sensitive scroll wheel makes navigating menus and browsing through images quick, easy and fun. On-screen “Hints & Tips” are also featured within the user interface, coaching users through the different camera settings and offering helpful guidance on the camera’s extensive range of features.

Make your mark with creative shooting
The IXUS 300 HS enables even the most inexperienced photographers to explore their creative side, offering a range of modes and functions that make it easy to capture striking images. Smart Auto with Scene Detection Technology provides the best results in all conditions, intelligently detecting the scene and selecting the optimum settings from 22 variables. Smart Flash Exposure also controls flash levels according to shooting conditions, providing the right amount of flash to ensure perfectly exposed shots in all situations.

A range of new and creative shooting modes make taking exciting shots both easy and fun. Fish-eye Effect mimics the distortion of a fish-eye lens, with three effect levels to choose from, whilst Miniature Effect makes subjects appear like miniature-scale models. Easy self-portraits are provided by Smart Shutter, which uses
Face Detection Technology to allow users to trigger the shutter using a smile or a wink of the eye. Using FaceSelf-Timer, users can also set the camera to shoot automatically after detecting a new face in the frame. For more advanced users requiring additional levels of creative control, the IXUS 300 HS offers manual control over shutter speed or aperture settings in Tv and Av modes respectively.

HD video capture – added flexibility in one stylish package
For moments that lend themselves to video, the IXUS 300 HS offers 720p high definition movie recording with high quality stereo sound. The lens’ quiet drive system allows users to zoom during recording with minimum audio interference, while the optical Image Stabilizer can also be engaged to reduce the effects of camera shake in video footage. An integrated HDMI-mini port makes it straightforward to share images, allowing pictures and video to be viewed directly on any HDMI-compatible screen, including HDTVs.

For users who want to transfer content wirelessly, the IXUS 300 HS includes Eye-Fi connected functions. The camera features a dedicated Eye-Fi section in the User Interface, on-screen icons, and will disable the automatic power-down function when the Eye-Fi card transmits data – allowing users to transfer content easily and without interruption [3].

CANON iMAGE GATEWAY – share your stories
Owners of the IXUS 300 HS can join the CANON iMAGE GATEWAY, an online facility for sharing photos and video. Users can take advantage of up to 2GB of personal storage capacity, creating enough room for hundreds of high-quality images. Mobile browsing is also supported, making it easy for friends and family to view photos on the move.

The IXUS 300 HS is compatible with a range of IXUS accessories including flash units, and a soft leather case is also available to complement and protect the unique design.

The IXUS 300 HS (white) is exclusively on sale at Jessops and is available from the end of May 2010.

The IXUS 300 HS (red) is exclusively on sale at John Lewis and is available from the end of May 2010.

[1] When compared to models not featuring a high sensitivity sensor.

[3] This product is not guaranteed to support Eye-Fi card functions (including wireless transfer). In case of an issue with an Eye-Fi card, please check with the card manufacturer.

Also note that approval is required to use Eye-Fi cards in many countries or regions. Without approval, use of the card is not permitted. If it is unclear whether the card has been approved for use in the area, please check with the card manufacturer.
[4] Some high-speed modes output at reduced resolution. See specifications for details.