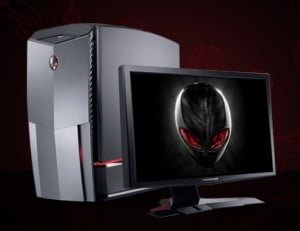 Alienware is an American computer hardware company which assembles third party components into desktops and laptops for high performance gaming. Their products consist of graphically intense applications such as video editing, simulation and audio editing. It was founded by Nelson Gonzales and Alex Aguila in 1996. The name Alienware was chosen because the founders were fond of the hit television show “the X files”, hence the name of their product Area 51. The product came to be known worldwide as Alienware Area 51.

Alienware Area 51 gaming PC offers an intel-970 processor, dual NVIDIA GTX 480 video cards and 2 terabytes of storage for high end gaming need. It’s definitely a gaming rig for people who believe in spending money for exceptional aesthetics. It’s unique in design and has incredible features. For a gamer who is looking to make his system a conversational piece, this product is the right choice. You will be amazed by the lights, vents, bells, whistles and gewgaws you will experience.

This Area 51 is big measuring 2′ high and 2′ deep. It weighs 90 pounds and has active vents which raises and lowers automatically according to how much your machine needs to be cooled. You can customize the outside case lights to provide a nice look. The inside of the case needs as much attention as the outside. There are internal theatre lightings, quick release panels and easy hard drive expansions. You can easily make changes in your PC because the entire case is internally lit even when it’s not plugged. It is one of the fastest PC s available and it plays any game on the market extremely well and even in 3D, which you will need with NVIDIA’S 3D vision kit.

Aside from that, Area 51 is designed to hold a full size motherboard and multiple dual width cards. The new chassis is a lot more angular than the previous one which was swoopy. Alienware Company has added an improved feel to the plastics and metal cases with a lot less façade and more substance than older Alienware cases. The chassis is designed to look like a unified piece, rather than compromising a bunch of add- ons tacked to a standard chassis. Alien Area 51 comes in various prices which one can afford. Due to its high demand by many people most Area 51 PC are out of stock quickly.

If you want to experience the best gaming extravaganza this Alienware Area-51 review recommends that you visit online stores which have stocked this great product.

Nadav Snir operates a website which includes coupons and discounts to the best electronics stores on the web. To get those discounts, visit: http://Great-Info-Products.com/Electronics/index.html