3-Way NVIDIA SLI® – the fastest PC gaming solution on the market – is available today. This new technology is currently supported on NVIDIA nForce® 680i or 780i motherboards with either three GeForce® 8800 GTX and GeForce 8800 Ultra-based graphics cards. 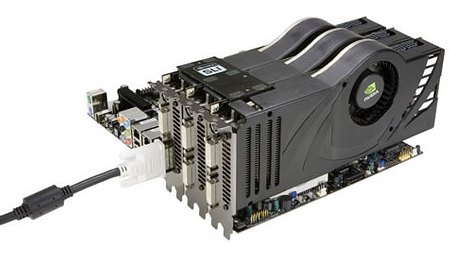 NVIDIA has also revealed a triple SLI setup for upcoming nForce 700 series and existing nForce 680i series motherboards. The setup can be achieved using three high-end video cards with two MIO ports (currently only for the 8800 GTX and 8800 Ultra) and a specially wired connector (or three flexible connectors used in a specific arrangement). The technology was officially announced in December 2007, shortly after the revised G92-based 8800GTS made its way out of the factory. In practical terms, it delivers up to a 2.8x performance increase over a single GPU system, giving high-end gamers approximately 60 frames per second at resolutions as high as 2560×1600 and with 8x antialiasing.

Unlike traditional SLI, or CrossFire X, 3-way SLI is limited to the GeForce 8800 GTX and 8800 Ultra graphics cards on the 680i and 780i chipsets, whereas CrossFire X can be theoretically used on multiple Radeon HD 2400 cards.