Wine (Wine is not emulator)

Wine is a software application which aims to allow Unix-like computer operating systems on the x86 architecture to execute programs that were originally written for Microsoft Windows. Wine also provides a software library known as Winelib which developers can compile Windows applications against in order to port them to Unix-like systems.

The name ‘Wine’ derives from the recursive acronym Wine Is Not an Emulator. While the name sometimes appears in the forms “WINE” and “wine”, the project developers have agreed to standardize on the form “Wine”.

The Wine developers released the first beta version of Wine (version 0.9) on October 25, 2005 after 12 years of development. The Wine developers have listed approximately 90 bugs that need to be fixed before version 1.0 can be released. Released under terms of the GNU Lesser General Public License (LGPL), Wine is free software.

Bob Amstadt (the initial project leader) and Eric Youngdale started the Wine project in 1993 as a way to run Windows applications on Linux. Inspired by Sun Microsystems’ Public Windows Initiative and Wabi (an attempt to get windows API fully reimplemented on the public domain, a project later shot down by Microsoft in 1996) for the Solaris operating system, it originally targeted Windows 3.x (16-bit) application software, although it currently focuses primarily on the dominant 32-bit applications. The project originated in discussions on Usenet in comp.os.linux in June 1993. Alexandre Julliard has led the project since 1994.

Rather than acting as a full emulator, Wine implements a compatibility layer, providing alternative implementations of the DLLs that Windows programs call, and processes to substitute for the Windows NT kernel.

The Wine developers write the software primarily for Linux, but the Mac OS X, FreeBSD and Solaris ports are currently well-maintained.Wine is available for other BSD distributions like OpenBSD and NetBSD through the ports collection of OpenBSD and NetBSD pkgsrc respectively. 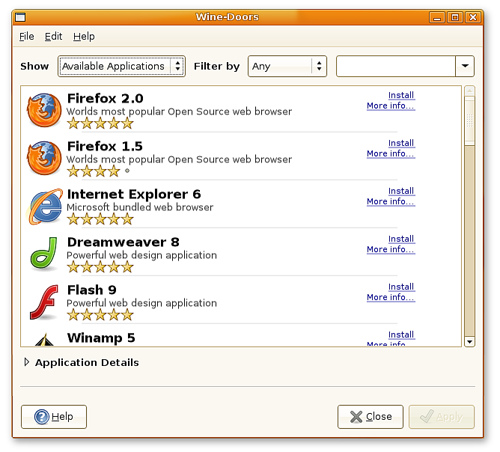 The project has proved time-consuming and difficult for the developers, mostly because of incomplete and incorrect documentation of the Windows API. While Microsoft has documented most Win32 functions, some areas such as file formats and protocols have no official Microsoft specification. There are also undocumented low-level functions and obscure bugs that Wine must duplicate precisely in order to allow some applications to work properly. Consequently, the Wine team has had to reverse engineer many function calls and file formats in such areas as thunking.

The involvement of Corel for a time assisted the project, chiefly by employing Julliard and others to work on it. Corel had an interest due to the porting of WordPerfect Office, its office suite, to Linux. However, after Microsoft made major investments in the company, Corel cancelled all Linux-related projects and the Wine effort stopped.CodeWeavers now employs Julliard and many other Wine developers to work on Wine and on CrossOver, CodeWeavers’ supported version of Wine utilizing some additional proprietary components.

The Wine project originally released Wine under the same MIT License as the X Window System, but owing to concern about proprietary versions of Wine not contributing their changes back to the core project, work as of March 2002 has used the LGPL for its licensing.

As of mid-2007, Wine runs some software with good stability and most software with minor issues. Most native Microsoft Windows DLLs necessary for the execution of 32-bit Windows binaries have compatible Wine counterparts. The developers of the Direct3D portions of Wine have continued to implement new features such as pixel shaders to increase game support.Wine can also use native DLLs directly, thus increasing functionality, but then a license for Windows is needed unless the DLLs were distributed with the application itself.

winecfg is a GUI configuration utility included with Wine. winecfg makes configuring Wine easier by making it unnecessary to edit the registry directly.

On a 64-bit Linux system, support for 32-bit Windows applications is handled by linking with 32-bit versions of Wine’s shared library dependencies. Some applications can be made to work with Wine, however doing so requires more tweaking than simply installing the application, such as manually configuring Wine to use certain Windows DLLs. The Wine project does not integrate such workarounds into the Wine codebase, instead preferring to focus solely on improving Wine’s implementation of the Windows API. While this approach focuses Wine development on long-term compatibility, it makes it difficult for users to run applications which can run using workarounds. Consequently, many third party applications have been created to ease the use of these applications which don’t work “out of the box” within Wine itself. The Wine wiki maintains a page of current and obsolete third party applications.

Wine-Doors is an application-management tool for the GNOME desktop which adds functionality to Wine. Wine-Doors is an alternative to WineTools which aims to improve upon WineTools’ features and extend on the original idea with a more modern design approach.

WineBot is an application-management tool which should act in a similar way as native Linux package managers like apt/dpkg/rpm. The project aims for data compatibility with Wine-Doors, in addition to providing a platform to track the hacks necessary to install certain applications and provide a framework for automated regression testing for the Wine project.

Other version of Wine

The core Wine development aims at a correct implementation of the Windows API as a whole and has sometimes lagged in some areas of compatibility with certain applications. Direct3D, for example, remained unimplemented until 1998, although newer releases have had an increasingly complete implementation.

CodeWeavers markets CrossOver specifically for running Microsoft Office and other major Windows applications including some games. CodeWeavers employs Alexandre Julliard to work on Wine and contributes most of its code to the Wine project under the LGPL. CodeWeavers also released a new version called Crossover Mac for Intel-based Apple Macintosh computers on January 10, 2007.

Transgaming has also produced Cider, a Wine library for Apple-Intel architecture Macintoshes. Instead of being an end-user product, Cider (like Winelib) is a wrapper allowing developers to adapt their games to run natively on Intel Mac OS X without any changes in source code.

Microsoft has generally not made public statements about Wine. However, the Microsoft Update software will block updates to Microsoft application software running in Wine-based environments. On February 16, 2005, Ivan Leo Puoti discovered that Microsoft had started checking the Windows registry for the Wine configuration key and would block the Windows Update for any component. Puoti wrote, “. . . even if this is only an initial attempt, they appear to want to discriminate against Wine users. While this may be acceptable for operating system components/updates, this is probably a violation of anti-trust law for all other downloads. It’s also the first time Microsoft has acknowledged the existence of Wine.”

The Windows Genuine Advantage (WGA) system also checks for existence of Wine registry keys, and the WGA FAQ states that WGA, by design, will not run in Wine, as Wine does not constitute “genuine Windows” as described in the WGA FAQ.Despite this, some reports have circulated of the WGA system working in Wine.In the case of Internet Explorer 7, Microsoft has disabled the WGA requirements.