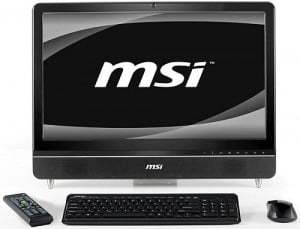 The Wind Top AE1920 incorporates all of the computer’s functions into an elegant white casing that features streamlined molding and transparent frame design that sheds the traditional cold feel of computers. In addition to being slimline and not taking up much space, it’s like a refined home accessory that adds to the style and atmosphere of your house.

A Host of Super-Value Software

1. Ultra-Convenient Touch Display
The touch screen makes operating the computer simple and convenient. The friendly Wind Touch 3D interface, along with the highly responsive touch display, let you forget about the keyboard and mouse while providing the same functionality of a standard desktop PC. Wind Touch 3D incorporates a thoughtful 4 zone operating interface that differentiates work, fun, tools, and web functions. Light finger taps on the screen facilitate easy browsing, and in each zone, finding the right application is easy with function icons that need only a light tap to activate. With all functions controlled with the flick of a finger, everyone from little children to the elderly can easily catch on. In addition, MSI’s exclusive Easy Viewer software has a touch control mode, so it’s easy to share photos with friends and family.

2. Fun Software
The Wind Top AE1920 comes pre-loaded with all-new touch software and games, including: MSI YouCam, MSI YouPaint, MSI YouMemo, Kidoz, and MSI Game Corner. With YouCam, touch controls create all kinds of interesting visual effects and can be easily shared with friends by using touch controls to upload video files directly to YouTube or Facebook. YouPaint comes built-in with many different stroke types to facilitate more personalized creations—these vivid computer drawings can easily become interesting designs by using the built-in palette, allowing those not familiar with drawing pictures to easily create art. For those not accustomed to using a keyboard and mouse, like children or seniors, YouMemo uses touch controls to instantly write notes or memos for friends or family. Kidoz is learning and entertainment software for children. In addition to its lively interface that attracts children, built-in games increase knowledge and helps kids learn while they are having fun. The MSI Game Corner has loads of touch control brain teaser games  suitable for all ages; whether you’re a grown up or a child, it’s a blast for all.

1. All-New Intel® Atom™ Processor
The latest Intel® Atom™ microprocessor uses all-new micro architecture with a special small-scale configuration and low power consumption design—the most important hub of an ultra-thin computer. Integrating a graphical interface, memory controller and Northbridge functionality on a single chip not only reduces the amount of chipsets, but also greatly reduces space requirements. This is the most compact and lowest power consuming Intel processor and chipset ever made.

What’s more, this processor also has full operating capabilities. With the new generation DDR3 memory, outstanding performance and 802.11 b/g/n wireless networking, you can wirelessly surf the web, and enjoy the efficiency and convenience of WLAN.

2. Ultra-Low Power Consumption
At peak operating speed, the Wind Top AE1920 requires only 35W of power. Compared to traditional PCs, the AE1920 can reduce power consumption by nearly 80%*, letting you enjoy both performance and power savings. In one year, using the AE1920 can save over 400 kilograms of carbon dioxide emissions and 200 trees*, so you can actually be green while enjoying yourself.
* Actual performance results will vary according to operating circumstances and different settings.

3. Noiseless Design
Using the Wind Top AE1920 means you don’t have to worry about the loud fan noise generated by traditional PCs. Featuring the latest cooling technology, whether you’re on standby or at full power, noise will not exceed 26 decibels—as quiet as a library—so you can enjoy a noiseless working environment. Also, the AE1920 complies with the most stringent green standards and regulations, including ENERGY STAR 5.0 standards and the US EPA’s Electronic Product Environmental Assessment Tool (EPEAT) certification. The AE1920 is a successful example of the inclusion of modern environmental protection concepts in product design.