Weaponize Yourself with the Latest GIGABYTE G1.Assassin, G1.Sniper and G1.Guerrilla 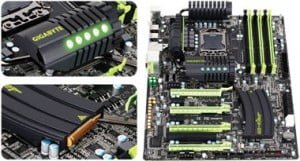 GIGABYTE TECHNOLOGY Co., Ltd, a leading manufacturer of motherboards, graphics cards and other computing hardware solutions, today at a press event at CES announced their latest line of dedicated gaming motherboards designated the G1-Killer series, consisting of the G1.Assassin, G1.Sniper and G1.Guerrilla. Based on the Intel® X58 chipset and featuring several state-of-the-art onboard solutions from industry heavy hitters including Creative and Bigfoot Networks, as well as quite a few new and exclusive GIGABYTE features, the GIGABYTE G1-Killer series motherboards are equipped to let gamers unleash total mass gaming destruction.

“GIGABYTE is thrilled to be able to introduce the world’s first motherboard series designed solely for elite gamers,” commented Henry Kao, Senior Vice President of Research and Development at GIGABYTE. “The G1-Killer series features the industry’s most advanced hardware and software solutions from Creative and Bigfoot Networks onboard as well as the top-notch quality and durability users have come to expect from GIGABYTE. So, lock and load gamers, the GIGABYTE G1-Killer series motherboards deliver a gaming experience unlike any other.”

“Sound Blaster audio technology is a class above any of the integrated chipsets currently on the market, and it’s clear that the PC industry concurs with this,” said Steve Erickson, Vice President and General Manager for Audio and Video at Creative. “When it comes to onboard audio solutions, we’re seeing more and more major motherboard manufacturers like GIGABYTE selecting Sound Blaster technology as their audio enhancement technology of choice, because of the far superior high-definition audio quality it furnishes.”

“In online games, the difference between victory and defeat is measured in fractions of a second,” said Michael Howse, CEO of Bigfoot Networks. “The Killer™ E2100 is the fastest networking solution ever created for online games, with unique technology that automatically prioritizes game traffic while also delivering unparalleled control over how your PC uses network bandwidth. We are pleased to partner with GIGABYTE to deliver superior network performance on the new G1-Killer™ family of gaming motherboards featuring Killer™ E2100 technology.”

Like soldiers about to head out into the line of fire, elite gamers know that the equipment they use can mean the difference between getting the frag, or being fragged. That is why GIGABYTE has strapped some big guns onto the G1-Killer series motherboards designed to heighten gamers’ super human killer instincts and enhance their game play.