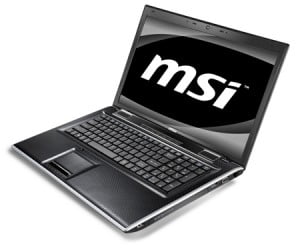 MSI’s all-new 17.3-inch FX700 and FR700 notebook computers with soft contours and gentle lines stand out from the crowd. In addition to chrome trim around the speakers, these laptops come with chiclet keyboards that offer a unique feel, raised multipoint touchpad, and a hot key zone with a brush metal finish. The FX700 and FR700 are also sheathed in MSI’s own anti-scratch, anti-smudge raised totem seal coating technology, putting them in a class all their own.

Stylishly refined
Perfect marriage of style and craftsmanship: The FX700 and FR700 laptops are proof that MSI continues to insist on the best. Their jet black covers are sheathed in non-peeling raised totem seal coating to prevent scratching and smudging. The centers of the covers are graced with MSI’s glowing platinum logo and the wrist rest areas with a soft raised diamond coating that not only soothes hands, but adds an extra touch of class. Precision technology: Every detail of the FX700 and FR700 was meticulously crafted by MSI’s design team. The power button is encircled by chrome which blends wonderfully with the cold, luminescent blue lights above the keyboard. The unassuming platinum trim around the speakers and body as well as the unmatched chiclet keyboard with its solid touch, raised multipoint touchpad, and the brush finish of the hotkey zone further underscore the taste and class of these two chic machines.

Turbo at the touch of a finger
Intel Core i5 processor: The FX700 and FR700 come with Intel’s powerful and energy-sipping Core i5 processor with Intel Turbo Boost and Intel® Hyper-Threading technology with dynamic adaptive performance to handle more data and vastly increase overall system performance.

TDE technology: The FX700 and FR700 pack MSI’s TDE (Turbo Drive Engine technology). A touch of the mirror finish P1 hot key above the keyboard instantly throttles up system performance, so that your computer doesn’t bog down when it’s processing big load applications.

Perfect speaker position: To build a laptop with superb sound, you need to be meticulous about each and every detail. Even speaker locations and sound field design have to be calculated with precision. MSI worked side by side with Dynaudio to carry out vast amounts of study and countless calculations to determine ideal locations to install speakers to obtain obstruction-free sound transmission.

Multiple HD hardware: The MSI FX700 and FR700 are equipped with a wide cinema-class 16:9 ratio LED display. Not only are colors rich and crisp, you don’t have those pesky black bars at the top and bottom or your screen when viewing HD films. And the HD720p webcam allows you to enjoy fast, smooth, bright, and high fidelity web calls with friends and family. If you want more than a high definition computer screen.