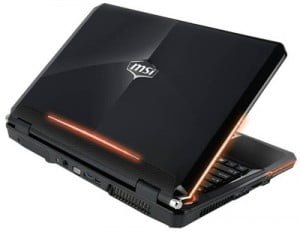 To meet gamer needs, MSI, in cooperation with internationally renowned professional recording and sound systems Dynaudio, employed unparalleled craftsmanship to fashion the king of gaming laptops—the GT660. Incorporating exceptional hardware, the GT660 is the first notebook in the world with MSI’s own TDE+ (Turbo Drive Engine+) technology to enhance processor and display performance. With just one touch, you can switch over to Turbo Drive, redoubling processor, memory, and graphic performance. Laptops have never looked (or sounded) so good.

MSI Marketing Director Sam Chern points out that the GT660 employs the Intel Arrandale notebook platform with the powerful Intel Core i7 processor which comes with the nVIDIA GeForce GTX 285M (1GB GDDR3 display memory) discrete graphics card with MSI’s exclusive TDE+ (Turbo Drive) technology to boost overall system performance and graphics processing capabilities with just one touch. And as if that weren’t enough, MSI, in close cooperation with world-class sound system designer and manufacturer Dynaudio, designed GT660’s incredible sound system to give you the equipment you need to truly enjoy your multimedia.

Just the right spot: To build a laptop with superb sound, you need to be meticulous about every detail. Speaker locations and sound field design have to be calculated with precision. In the early stages of development, vast amounts of study and countless calculations were carried out on the GT660 to determine the ideal locations to install speakers to obtain obstruction-free sound transmission.

Optimal speaker units, sound card circuit: MSI and Dynaudio have designed high quality speaker units with almost no coloration as well as an optimal sound card circuit based on speaker and system configuration. Over 1200 hours were spent in testing and tweaking each frequency to obtain ideal tone and balance, so no matter what kind of music you listen to, you’ll get crisp, clean sound at all frequency levels.

MSI’s Cooler Boost technology: In addition to the TDE+ technology, the GT660 comes with MSI’s own Cooler Boost technology tailor made for the GT660’s revved up hardware. One touch of the luminescent hotkey located above the keyboard initiates the powerful cooling capabilities, keeping your system cool as a cucumber even in the hottest work conditions.

Powerful hardware
Topnotch processor and graphics card: MSI’s GT660 boasts the most powerful hard/software, including Intel’s latest Core i7 quad core processor and the high end nVIDIA GeForce GTX 285M (1GB GDDR3 display memory) discrete graphics card as well as Intel’s Turbo Boost technology, allowing you to power up or down as necessary, depending on the load requirements of the task at hand.

3 DDR3 memory slots: To give NB gamers the power they need, the GT660 is the only laptop equipped with three DDR3 memory slots, so you can expand memory to 12GB, giving your NB performance heretofore found only in servers.

USB3.0 ports: The GT660 come with the latest USB3.0 ports which transfer speeds of 4.8Gbs—10 times faster than those of the USB2.0, and 80% higher power transmission, providing vastly higher data transfer and charging speeds for external hard drives, thumb drives, and other handheld electronic devices.

Awesome presence
Snazzy exterior: The GT660 follows the tradition of the MSI G series of NB computers in that it’s just plain cool looking. The glowing white MSI logo on the cover is set in the middle of a raised black diamond trident below a smoldering red slash a la Knight Rider. Hip yet low key—that’s the GT660. The rhombic pattern on the wrist areas and high tech brush finish on the touchpad add class and texture. The body is sheathed in MSI’s exclusive glossy color film print to protect the GT660 from scratches and wear, while enhancing its stunning looks.

Light and sound show technology: The MSI GT660 has another cool feature—a one-of-a-kind LED light show, highlighting LED lights around the NB’s edges. So whether you’re listening to music or engrossed in an exciting, fast paced game, you can flick on the MSI LED light show hotkey with the touch of a finger and lights embedded on both sides of the notebook and in front of the keyboard will pulsate automatically to sounds emitted by your laptop, kicking the thrill level of your GT660 up a few notches.