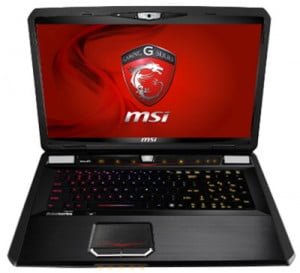 MSI has received high marks from all quarters for its high-end gaming laptops, including being selected for Innovations Honorees at the CES 2012, the IT industry’s equivalent of an Oscar. Now, MSI is introducing the GT60 and GT70—the ultimate in next generation gaming notebooks. They feature Intel’s third gen quad core processor and new generation Nvidia GeForce GTX 670M discrete graphics card—the fastest one of its kind on the planet. Specially designed to meet the extreme demands of extreme gamers around the world. These killer notebooks also boast awesome peripherals.

Eric Kuo, associate vice president for global sales, MSI Notebook, points out that MSI’s soon-to-be-unveiled, next generation of versatile gaming NBs—the GT60, GT70, are the top battle laptops on the planet today and are the top choice of top players around the world (Top player, top choice!). Not only do they feature the epoch-marking processor using 22nm production technology and discrete graphics cards, they also come with unparalleled peripherals, such as professional Steelseries keyboards, industry-leading professional grade Killer Gaming Networking, the world’s fastest read-write Super RAID Dual SSD, and up to 32G of memory, to meet the needs of serious gamers the world over.

Kuo went on to say that when it comes to 3D gaming performance (very important to gamers!), the GT60 and GT70 have over 1,000 lighting effect combos and boast explosively crisp sound. These are the result of MSI’s Audio Boost sound solution, AMP, and gold flash audio jack exclusively for earphones which come together to bring the next-generation Dynaudio sound technology to an even higher level of perfection.

Intel 3rd generation Core i7 quad core processor: The GT60 and GT70, MSI’s new generation gaming notebooks, feature the Intel third generation Core i7 quad core processor. This cutting-edge processing platform employs 22nm production technology, currently the most advanced on the planet, enhancing processing performance by as much as 15% over the previous generation, while saving power and optimizing cooling capabilities. To kick up performance a few more notches, the new generation Intel Core i7 processor supports Intel Turbo Boost 2.0, a technology which automatically allocates processor resources in accordance with processor load, thereby enhancing the core speed of each core to maximize computer performance.

Nvidia’s top-of-the-line GeForce GTX 670M discrete graphics card: The powerful MSI GT60 and GT70 come locked and loaded with the Nvidia GeForce GTX 670M discrete graphics card which boasts 3GB GDDR5 of display memory to give it the most advanced hardware in the cosmos. That coupled with the fact that it supports DirectX 11 and nVida PhysX technologies. You will be amazed by the detail in explosions going off all around you, smoke and dust over battlefields, as well as wisps of clouds and rippling water in adventure games.

TDE technology: The powerful MSI GT60 and GT70 use MSI’s Turbo Drive Engine (TDE) technology, so just one touch of the luminescent TDE hotkey located above the keyboard instantly revs up performance. The GT60 and GT70 also have MSI’s own powerful Cooler Boost technology; so again, just one touch of the luminescent hotkey above the keyboard kicks in the powerful cooling function to rapidly reduce system temp to enhance system stability.

Super RAID design and up to 32GB of memory: MSI’s GT60 and GT70 come equipped with four DDR3 memory slots for up to 32GB of memory. They also feature MSI’s own Super RAID technology with dual SSD optional. Using accelerated dual solid state drive (SSD) architecture not only gives these machines twice the storage capacity, it also cranks up read speed by some 486% over traditional HDD Raid 0. (See table below) In addition to booting up more quickly, it more than satisfies the demand for faster reading capabilities required for the battle scenes and awesome effects of the latest games out there, giving you an edge in the thick of combat.

Unparalleled professional-grade SteelSeries keyboard: MSI has heard your calls for equipment designed with the gamer in mind. As such, we got together with SteelSeries, the leader in gaming peripherals, to create a new generation keyboard for the MSI GT60 and GT70. And they can lets you choose from among five keyboard backlighting scenarios—Normal, Gaming, Wave, Breathing, and Dual Color, that can be used in coordination with variable section lighting, and seven colors offering over 1,000 variations. Gamers will also appreciate the fact that when you depress the Gaming Mode hotkey, the frequently used W, A, S, D, and Ctrl keys located on the left side of the keyboard are all backlit in LED while the rest of the keyboard stays dark. This allows you to quickly find the key you’re looking for, so you can remain focused on the rapidly changing melee you are in, giving you that extra edge you need to come out on top.

Killer Gaming Networking: Nothing is worse than losing to opponents in online games, because of slow transmission speeds. The record-breaking, new generation MSI GT60 and GT70 gaming laptops come equipped with Killer Gaming Networking to give you blazing online transmission speeds that are faster than regular LAN, reducing latency/ping time for a hiccup-free online gaming experience and effectively eliminating incorrect commands resulting from game lag, greatly increasing your chances of coming out on top online.

Cool metal brush finish: The aluminum chassis of MSI’s meticulously designed new generation gaming laptops feature a brush finish which serves to connect each detail in the overall design, underscoring the envelope-pushing technology and style of these professional-grade machines. The GT60 and GT70 sport anti-glare full HD screens which are 15.6-inch and 17.3-inch in size, respectively, for the best possible visuals. The 720p, 30 fps HD webcam gives you smooth video and impeccable resolution when conferencing with friends and family.

MSI Audio Boost solution: To give you unequaled surround stereo sound, the GT60 and GT70 gaming laptops employ MSI Audio Boost solution technology to bring next-generation Dynaudio sound technology to an even higher level of perfection. The audio output employs a gold flash audio jack, which although expensive, is the best conductor there is. It also prevents oxidation, enhances transmission efficiency, and reduces noise, endowing the GT60 and GT70 with crisp, clear, high fidelity stereo sound. In addition, the built-in earphone AMP even gives headsets superior acoustics, so you experience stereo sound to give you a sense of space and directions when playing and no lag when listening to game sounds or when talking with teammates. It doesn’t get any better than this.