Proton have released new version of SAGA. This is the final Saga, there is no Saga after this.

The Proton Saga was launched in September 1985 by Malaysia’s Prime Minister at that time, Tun Dr. Mahathir bin Mohamad. Before the production of Proton Saga, a contest was held to choose the name of the first national car, and the name Saga was chosen from the winner of the contest. The winner of the contestant was Ismail Jaafar[1], a retired military soldier. When asked why he chose this particular name, he replied as “saga” (Abrus precatorius) is a type of seed commonly found in Malaysia, and that the Proton Saga is as strong as the saga seed.

In 1992, the Saga was given a facelift and its name expanded as Proton Saga Iswara (also known in short as Proton Iswara), after a species of butterfly in Sarawak. Modifications included slimmer headlights, plastic bumpers, side mouldings, coloured door handles, grooved taillight clusters and rear number plate repositioned to the bumper. This particular model is used as taxis in Malaysia and some are converted to NGV. Due to the modification, boot space was reduced by half to accommodate the NGV tank and there are only a few petrol stations by Malaysian oil-giant Petronas in the Klang Valley that sell natural gas, although there are plans underway to increase the number of stations selling it at various locations around Kuala Lumpur.

As a loose successor to the Saga Iswara Sport, Proton gave the Iswara a new facelift and renamed it back to Saga (or know as Saga LMST by local car community) in 2003. The interior has an entirely new dashboard, door panels and an instrument panel with a digital display consisting of an odometer, a fuel gauge and a temperature gauge. Meanwhile, the exterior received new headlights and taillights and colour-coded bumpers and wing mirrors. Proton retuned the 1.3-litre carburettor engine, and fitted a new exhaust system, increasing its power rating to 83 bhp (62 kW). It is only available with the 5-speed manual transmission.

On the 18th January 2008, Proton unveiled the long-awaited successor to the original car, which will be phased out in May. Retaining the Saga name, the new car is based on the Savvy and is shorter but wider and taller than the previous generation.

The new Saga is powered by the same 1.3-litre Campro engine fitted to entry-level Gen-2s. However, it has a new Intake Air-Fuel Module (IAFM) which varies the airflow into the engine to improve efficiency, smoothening out the problematic dip in the torque curve in the lower and middle rev ranges. Also new is the 5-speed manual transmission sourced from Aichi Kikai, which Proton engineers say allows them greater flexibility in specifying gear ratios than the old Mitsubishi unit.

Because the Saga will be used as a taxi (many taxis in Malaysia are powered by compressed natural gas), the car was designed to accommodate a CNG tank without considerably restricting boot space.[6]

The new Saga will be the cheapest Proton once the RM26,999 original is retired, with pricing varying between RM31,400 and RM39,800. This led Proton to dub it as “the people’s car”. 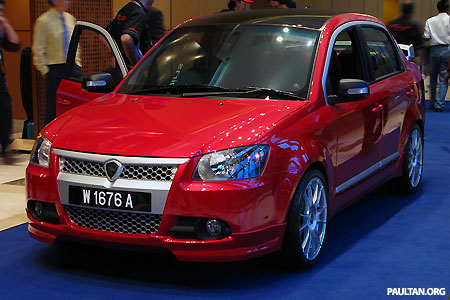