The success of the Android-powered handset could spur other manufacturers to adopt Google’s open source operating system.

T-Mobile has a hit on its hands with its Android-powered smartphone, as the T-Mobile G1 has sold more than a million units in about six months. 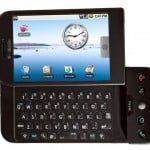 The news came during Deutsche Telecom’s earning call, and it’s a good sign for the Google (NSDQ: GOOG)-backed operating system. The G1 launched in October, but it was unclear how well it would be received because it was an untested OS and lacked the enterprise features that generally attract smartphone buyers.The handset has a 3.2-inch touch screen that slides up to reveal a full QWERTY keyboard. It also has the features one expects from a high-end smartphone, including Wi-Fi, Bluetooth, and GPS. One key differentiator of the G1 is that it has deep integration with Google’s Web services, including Gmail, Google Maps, and Google Calendar. [via]