Satay (spelled as sate in both Indonesian and Malay and the Netherlands) is a dish consisting of chunks or slices of dice-sized meat (chicken, goat, mutton, beef, pork, fish, etc.) on bamboo skewers. These are grilled over a wood or charcoal fire, then served with various spicy seasonings (depends on satay recipe variants).

Satay may have originated in Java or Sumatra, Indonesia, but it is also popular in many other Southeast Asian countries, such as: Malaysia, Singapore, Philippines, and Thailand, as well as in The Netherlands which was influenced through its former colonies. 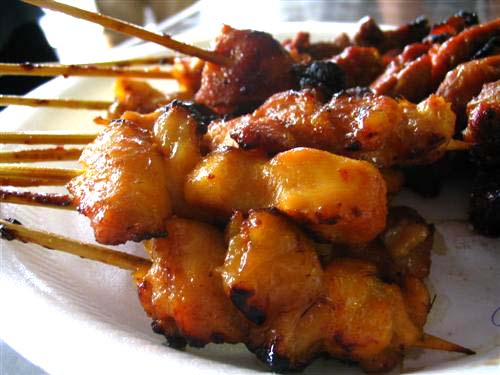 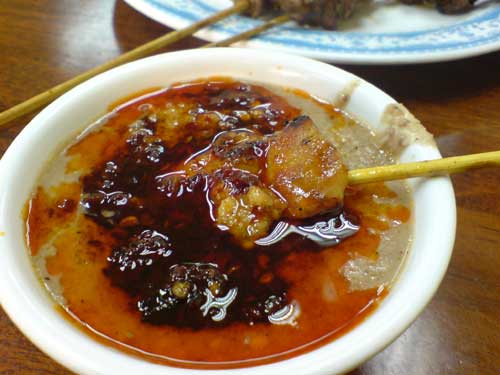 Satay is a very popular delicacy in Indonesia, with a rich variety among Indonesia’s diverse ethnic groups’ culinary art (see Cuisine of Indonesia). In Indonesia, satay can be obtained from a traveling satay vendor, from a street-side tent-restaurant, in an upper-class restaurant, or during traditional celebration feasts. In Malaysia, satay is a popular dish – especially during celebrations – and can be found throughout the country. A close analog in Japan is yakitori. Shish kebab from Turkey and sosaties from South Africa are also similar to satay.

Although recipes and ingredients vary from country to country, satay generally consists of chunks or slices of meat on bamboo or coconut-leaf-spine skewers, grilled over a wood or charcoal fire. Turmeric is often used to marinate satay and gives it a characteristic yellow color. Meats used include: beef, mutton, pork, venison, fish, shrimp, squid, chicken, and even tripe. Some have also used more exotic meats, such as turtle, crocodile, and snake meat.

It may be served with a spicy peanut sauce dip, or peanut gravy, slivers of onions and cucumbers, and ketupat.

Pork satay can be served in a pineapple-based satay sauce or cucumber relish, to be eaten only by non-Muslims. An Indonesian version uses a soy-based dip.

The Philippines has two versions of Satay, the first is marinated then brushed on with a thick sweet sauce consisting of soy sauce and banana ketchup (which gives its red colour) then grilled, due to American influence, this version is simply called Barbecue/Barbikyu. The second, Satti is native to the peoples of Mindanao, Sulu and Tawi-Tawi, and is much more similar to traditional Satay, except that it is served with a thick peanut infused soup as well. This dish is well renowned by locals in the main southern Philippine cities of Zamboanga and Davao.

Satay is not the same as the Vietnamese condiment, “Sate”, which typically includes ground chili, onion, tomato, shrimp, oil, and nuts. Vietnamese sate is commonly served alongside noodle and noodle-soup dishes.