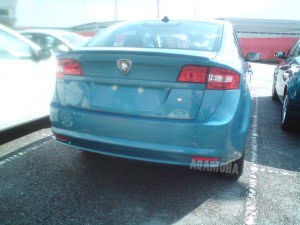 PROTON Holdings Bhd (Proton) has denied speculation that global car model, code-named P3-21A have a technical problems resulting delays in the launch, but waiting appropriate time for the official launch.

Group managing director Datuk Syed Zainal Abidin Syed Mohamed Tahir said Proton P3-21A will be launched at the end of March and according to Syed Zainal, booking still not yet open but many people see the reaction on the model is well received after its launch.

“The company expects to market the car to Thailand and Indonesia this year, while in Australia are likely next year,” he said at a news conference on Proton automotive exhibition, ‘Power Of 1’ in Subang Jaya, yesterday. ‘Power Of 1′ is the biggest automotive exhibition which will last Proton for five days at the Bukit Jalil National Stadium on 14 to 18 March. In the exhibition, people were able to watch live global car model and make a reservation on March 14 simultaneously throughout the country. He said Proton is targeting to receive 1000 P3-21A booking in the five-day exhibition and the public can see the construction process of vehicle components.

“Power Of 1’ is a Proton agenda to strengthen its brand to the public and it will be profitable through exhibitions, sales and activities with 10,000 visitors expected to attend every day. “This exhibition is also equipped with a mini circuit that provides an opportunity for people to see demonstrations by Alister McRae driving the Satria Neo S2000 rally that won the 2011 Asia Pacific Rally Championship,” he said. Meanwhile, when asked to comment on the new conditions of financing by Bank Negara Malaysia (BNM), he said he believes it not only affects the products of the national car, but it also affects the automotive industry as a whole.

“Discussions with banks and BNM has been made and we are still waiting if there are any initiatives that may be available to help people get financing,” he said.