Openmoko is a project which encompasses two related sub-projects, with the combined aim of creating a family of completely open source mobile phones. The project was founded by FIC.

The second sub-project is the development of Openmoko phones — the hardware devices on which Openmoko Linux runs. The first device released was the Neo 1973, which will soon be joined by the Neo Freerunner some time in 2008. Unlike most other mobile phone platforms, these phones are designed to provide end users with the ability to modify the operating system and software stack. Other Openmoko supported phones are listed here.
Openmoko Linux

Openmoko Linux uses the Linux kernel, together with a graphical user environment built using the X.Org Server, GTK+ toolkit and the Matchbox window manager. The OpenEmbedded build framework and ipkg package system are used to create and maintain software packages.

Native applications can be developed and compiled using the C or C++ languages.

Initial versions of the software are developed for the Neo1973 and Neo FreeRunner phones from FIC. There has been little effort as yet in porting the OS to other phones. 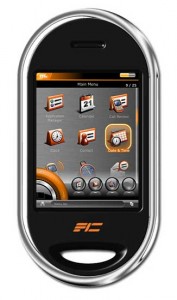 The Second hardware based on the GTA01 design is the Dash Express, an automotive navigation system. The Dash Express has a faster CPU (Samsung 2440) and Wi-Fi ability.

The third hardware platform is the GTA02.

The Neo1973 (codenamed GTA01) phone is a “developers only” release, costs US$300 and can be used with any GSM carrier that does not use the 850-MHz band. This phone can also run the Qtopia user interface.

On January 4, 2008, Openmoko issued a press release naming the revision of the Neo1973 the Neo FreeRunner (codenamed GTA02). The changes include a faster processor (400 MHz), 802.11b/g Wi-Fi, two 3D accelerometers and 2D graphics acceleration. FreeRunner may ship to selected developers as early test devices in Spring 2008. It will not be purchasable by end-users at this time.

On 2 January 2008, the Dash Express, a GPS device, with hardware developed by FIC was announced running Openmoko Linux.

This device — initially codenamed the HXD8 — seems to use little or none of the openmoko user-interface, simply using patches to the kernel developed by Openmoko inc, and running an application from Dash Navigation on it to provide navigation and user interface.

It is unclear whether this device is permitted to run other applications.