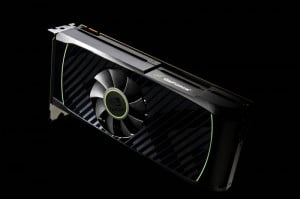 Like all NVIDIA “DX11 Done Right” GPUs, the GTX 560 Ti delivers the world’s fastest performance for DX11 games in its class. When compared to the closest competitive product, the GTX 560 Ti is up to 65 percent faster(iii) in today’s newest DX11 tessellated games, and 30 percent faster(iv) in previous-generation DX9 and DX10 games. With a superior design that includes a default graphics core clocked to 822MHz, 8 tessellation engines and 384 CUDA cores that were architected for next-generation DX11 games, the GTX 560 Ti is even up to 46% faster(v) than the competition’s product offerings that cost upwards of 20% more!

“The GTX 560 Ti GPU has it all: awesome DX11 performance, terrific overclockability, and ultra quiet operation — attributes of the perfect performance GPU,” said Drew Henry, general manager of GeForce GPU business at NVIDIA. “With the GTX 560 Ti under the hood, and an awesome library of DX11 titles coming in the very short future, it is truly a great time to be a PC gamer!”

With full support for NVIDIA 3D Vision™ and NVIDIA Surround™ technologies, the GeForce GTX 560 Ti GPU also provides the graphics horsepower and video bandwidth needed to experience more than 500 games and high-definition Blu-ray movies in eye-popping stereoscopic 3D on a single display or spanning across three screens for an immersive gaming environment. And with NVIDIA SLI™ technology, the industry’s most scalable multi-GPU platform, gamers will be delighted by the sheer increase in gaming performance by adding a second GeForce GTX 560 Ti to their PC.

With an estimated selling e-tail price starting at $249 USD, the GTX 560 Ti is available starting today from the world’s leading add-in card partners, including ASL, ASUS, Colorful, ECS, EVGA, Gainward, Galaxy, Gigabyte, Innovision 3D, Jetway, Leadtek, MSI, Palit, Point of View, PNY, Sparkle, Zotac and others. At launch, there will be a wide assortment of GTX 560 Ti cards available, including those with stock clocks of 822MHz and others that are clocked much higher, including some at 1GHz.

For more information about the GTX 560 Ti, please visit www.geforce.com.

One thought on “NVIDIA out new GeForce GTX 560 Ti”