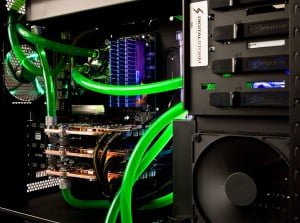 Digital Storm, the predominant name in system integration, proudly announces NVIDIA GeForce GTX 580 integration into its Black|OPS gaming systems. With the addition of these power GPUs, gamers can now leverage the unparalleled performance of the world’s fastest DirectX 11 GPU.

The GeForce GTX 580 is NVIDIA’s flagship GPU that delivers a seamless gaming experience unlike any other. With overall improved overall performance and an innovative vapor chamber thermal design, the GTX 580 blazes through the latest games while running quieter than the previous generation. The new processor supports all the premium GTX gaming technologies, including NVIDIA Surround, 3D Vision, PhysX and SLI.

“Games like Call of Duty: Black Ops envelope gamers in graphics that are so detailed and life-like, that it’s a disservice to experience them with anything less that the best GPU on the market,” commented Rajeev Kuruppu, Digital Storm’s Director of Product Development. “The GTX 580’s vapour chamber helps keep the card cooler and also makes it run quieter, helping gamers immerse themselves deeper into their favourite titles.”

Digital Storm’s Black|OPS systems with NVIDIA’s GeForce GTX 580 are currently available for purchase at www.DigitalStormOnline.com. The Black|OPS Assassin configuration has a base price of $2,108.