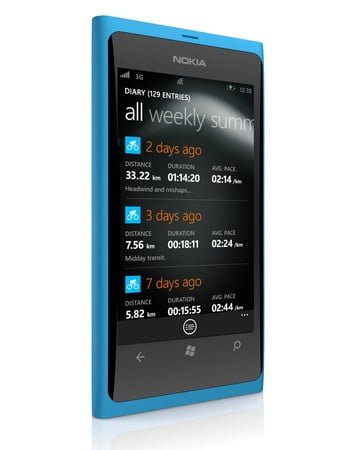 At Nokia World, the company’s annual event for customers, partners and developers, Nokia demonstrated clear progress on its strategy by unveiling a bold portfolio of innovative phones, services and accessories, including the first smartphones in its Windows Phone-based Nokia Lumia range. The stunningly social Nokia Lumia 800 brings content to life with head-turning design, Nokia’s best social and Internet experience, familiar Nokia elements, such as leading imaging capabilities and new signature experiences. The colorful and affordable Nokia Lumia 710is a no-nonsense smartphone that brings the Lumia experience to more people around the world.

“Eight months ago, we shared our new strategy and today we are demonstrating clear progress of this strategy in action. We’re driving innovation throughout our entire portfolio, from new smartphone experiences to ever smarter mobile phones,” said Stephen Elop, Nokia President and CEO. “From the Nokia Lumia 800 to the Nokia Asha 201, we are bringing compelling new products to the market faster than ever before. I’m incredibly proud of these new devices – and the people of Nokia who have made this happen.”

“Since Nokia’s major strategic shift only eight months ago, the company has found a new energy. It has provided substantial improvements to Symbian, managed to differentiate on Windows Phone and it continues to build on its strong portfolio in mobile phones,” says Pete Cunningham, Principal Analyst, Canalys. “Nokia is delivering on its pledges, and is clearly demonstrating its path to future success.”

Both smartphones include signature Nokia experiences optimized for Windows Phone, including Nokia Drive, which delivers a full-fledged personal navigation device (PND) with free, turn-by-turn navigation and dedicated in-car-user-interface; and Nokia Music introducing MixRadio, a free, global, mobile music-streaming application that delivers hundreds of channels of locally-relevant music. In an update delivered later this year, Nokia Lumia users will also gain the ability to create personalized channels from a global catalogue of millions of tracks. Also integrated in Nokia Music is Gigfinder, providing the ability to search for live local music for a complete end-to-end music experience, as well as the ability to share discoveries on social networks and buy concert tickets also coming in the Nokia Music software update delivered later this year.

Completing the ultimate mobile audio offering, Nokia also introduced the on-ear Nokia Purity HD Stereo Headset by Monster and the in-ear Nokia Purity Stereo Headset by Monster, co-designed and co-developed by Monster, a recognized leader in high performance audio. Both products provide a fresh listening experience and are the first output of the exclusive long-term partnership between Nokia and Monster, intended to introduce a range of premium audio accessories to reflect the outstanding quality and bold style of the Lumia range.

The new Nokia Lumia 800 is now available in select countries for pre-order on www.nokia.com and is scheduled to roll-out across France, Germany, Italy, the Netherlands, Spain and the UK in November, with 31 leading operators and retailers providing unprecedented marketing support in those first six countries. It is scheduled to be available in Hong Kong, India, Russia, Singapore and Taiwan before the end of the year, and in further markets in early 2012.

The Nokia Lumia 710 is scheduled to be available first in Hong Kong, India, Russia, Singapore and Taiwan toward the end of the year alongside the Nokia Lumia 800, before becoming available in further markets in early 2012.

Nokia also announced its plans to introduce a portfolio of products into the US in early 2012 and into mainland China in the first half of 2012.  In addition to the existing products, which include coverage for WCDMA and HSPA, Nokia also plans LTE and CDMA products to address specific local market requirements.

Asha: A new family of smarter mobile phones
Nokia continues its mission to deliver high quality, stylish devices that provide the best access to social networks, the Internet and information, and offer the best overall experience and value proposition for the next billion mobile phone users. These consumers want access to innovations such as easy-to-use dual-SIM, local services and content, and third-party apps, all with a superior user experience for which Nokia mobile phones are known.

The device harnesses a powerful 1Ghz engine, 3G and WLAN to deliver a fast Internet experience. Social networks, email and IM are at the center of the experience, easily accessible from the homescreen. The Nokia Asha 303 is powered by the cloud-based Nokia Browser, which by compressing the web by up to 90%, provides higher speeds and a more affordable access to the Internet.

Entertainment and applications are also a core part of the Nokia Asha 303 offering. Angry Birds Lite, the popular mobile game, comes preinstalled, together with support for other globally relevant applications such as Facebook Chat, Whatsapp messaging and the latest release of Nokia Maps for Series 40 (in selected markets). The price will vary from market to market and operator to operator. The estimated retail price for the Nokia Asha 303 will be approximately 115 EUR, excluding taxes and subsidies. It is expected to start shipping in the fourth quarter of 2011.

Users have fast access to messaging, email and instant messaging from the home screen and can swipe to access apps, music or games from the Nokia Store. The Nokia Asha 300 also arrives preloaded with the popular Angry Birds game.

Nokia Maps: location services designed to make every day better
With an aim to continuously improve its location-based offering, Nokia showcased the latest versions of Nokia Maps and Nokia Drive for Windows Phone. These and other map-related applications introduced at Nokia World aim to make Nokia Maps relevant for commuters and to find interesting places in the city where people live. In addition to its world-class, free walk-and-drive navigation for more than 100 countries worldwide, the Nokia Public Transport application tracks public transportation directly on a mobile device in more than 430 cities worldwide, including up-to-the-minute updates on bus and train routes for 45 cities. Nokia also introduced Nokia Pulse, which allows location-tagged updates and photos to be sent privately, adding location to conversations with the people that matter most. Nokia also showcased Nokia Live View, which turns the phone’s camera view finder into a reality augmenting tool. With Nokia Live View, a phone can be pointed to a building or street and the names of the places become superimposed over them, offering one click access to detailed information about businesses, restaurant or attractions. All the applications announced today are available at Nokia’s Beta Labs (betalabs.nokia.com).

Nokia also announced:
· Nokia Maps is now powering Yahoo! Maps, starting with the US and Canada
· An agreement with the New York Metropolitan Transportation Authority to develop a NFC-based smartphone ticketing solution to pilot on New York regional commuter trains starting before the end of 2011

For more information on Nokia World 2011, including the full event agenda, please visit http://events.nokia.com/nokiaworld. To follow or contribute to the event discussion online, visit the Nokia Conversations blog, follow @nokia and use #NokiaWorld.