Nokia N77 is a special member of the Nokia N-Series cell phones as it has been with brought keeping the latest trends of mobile technology in mind. The cell phone has a wide clear screen with an effective display consisting of almost 16 million colors with the size of 2.4 inches. The screen is a flat QVGA screen which works very effectively like a TV screen on which one can view all the favorite videos and programmes when connected. 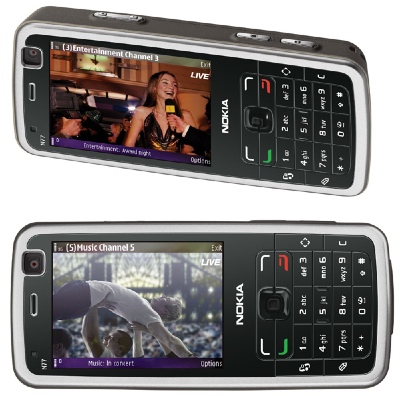 It comes in black color giving it a gorgeous look and feel. It also has an integrated 2 Mega Pixel with 1600*1200 pixel configuration. It also supports the inbuilt flash and with user can click and save the videos on the cell phone. The images and the videos can also be edited in the cell phone. Along with this, there is also a secondary CIF video call camera. The brightness of the videos and pictures can also be adjusted with a ambient light detector. One can view almost 50 channels on this mini TV for up to 5 hours

The handset has a 20 MB shared memory which can be expanded using a MicroSD slot. The variety of ring tones can be downloaded in the cell phone in the mP3 and Polyphonic formats. The cell has both the video play back player and music player which support the formats like MP3, M4A, AAC and WMA etc.

Similar to the other Nokia N series phones N77 also works on the Symbian operating system S 60 release . The user can send and receive the SMS, MMS, can also perform instant messaging and also remain connected with the world by easily accessing the Emails on the handset as it can be connected with internet via blue tooth, GPRS, EDGE and WAP also. It has a USO pop port also.

The various features which are quite important for the cell carriers are also available in the handset like the calendar and the organizer and it also facilitates working on office tools like the Quick office document viewer which consists of quickword, quickpoint and quicksheet very similar to the Microsoft office on any PC and adobe PDF reader too. It also has the FM radio inbuilt.[youtube]pFtE1F_aU_A[/youtube]

It is quite updated with the technology point of view as it supports the stereo headset with the blue tooth wireless technology so quite a techno oriented cell phone. The game lovers can also download and enjoy playing the Java based games also on it.

The handset has a talk time of up to four and a half hour and has standby time of almost 170 hours or approximately 7.5 days. Thus, overall it is a muli-platform for TV watching, office tasks, entertainment, high quality video collection and not to forget a cell phone.

Want the best online deals for computers and laptops? Let DealWhiz be the whizard which helps you in getting the best
href=”http://www.dealwhiz.com/here-are-some-of-the-latest-dell-coupons/”>dell coupons and popular deals with HP computing. Try it now to save money with exclusive money saving deals every day.