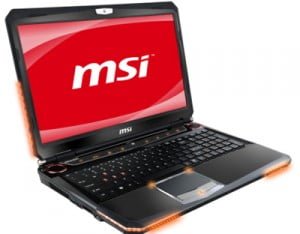 You’re a sniper in the middle of a fierce firefight. You’re trying to get an enemy soldier in your sites, but because he’s far away, poor resolution makes it hard to lock it on him. MSI Marketing Director Sam Chern explains that the GT663, MSI’s new generation gaming series laptop, comes equipped with GeForce GTX 460M (1.5GB GDDR5), nVidia’s most advanced discrete graphics card to support DirectX 11. The high resolution it provides faithfully displays scenes from the battle, giving you clear shots of opponents. You can’t blame your equipment anymore. Sam Chern points out that MSI already uses this series of discrete graphics cards in its powerful and stylish F series laptops which have won praise from media organizations the world over.

PhysX™ technology: MSI GT663 comes with the GeForce GTX 460M discrete graphics card which supports PhysX™ to fully utilize each processing core in the GeForce GPU to greatly enhance physics processing capabilities, allowing the nVidia PhysX™ software to more faithfully reproduce the universe of your choice with collapsing walls, shattered glass all over the floor, and even water that changes shape with the influence of external forces.

Powerful hardware
MSI Marketing Director Sam Chern explains that MSI’s new generation G series GT663 gaming laptop comes with the latest Intel Core i7 quad core CPU under the hood as well as three DDR3 memory slots for a maximum of 12GB of expandable memory. In addition, MSI worked in cooperation with internationally renowned sound system designer Dynaudio to give the GT663 the ultimate in audio. It also has DTS Surround Sensation UltraPC™ technology to give you cinema-class sound at no extra cost through dual-channel speakers or headsets.

Dual hard disk architecture: The GT663 comes with two hard drives, endowing this mean machine with up to 1TB of memory.

TDE+ technology throttles up performance
TDE+ double Turbo Drive technology: The GT663 has double Turbo Drive technology to rev up both processor and display performance. Just one touch of the luminescent Turbo hotkey above the keyboard engages the TDE+ (Turbo Drive Engine+ technology), instantly boosting system speed for enhanced processor and display performance. Not only does it keep your system from bogging down when executing load-intensive applications, this highly responsive computer has got your back when you’re surrounded by hordes of angry goblins or careening through the universe at the speed of light.

Cooler Boost technology: In addition to instant Turbo Drive courtesy of TDE technology, the GT663 has another awesome feature—MSI’s own Cooler Boost technology. Again, just a touch of a luminescent hotkey located above the keyboard kicks in the powerful cooling action. The GT663 also offers players core temperature change and variable fan speed, allowing it to stay cool as a cucumber even when working for extended periods in high temperatures.

Awesome audio
Perfect speaker position: To build a laptop with superb sound, you need to be meticulous about every detail. Even speaker locations and sound field design have to be calculated with precision. MSI worked side by side with Dynaudio to carry out vast amounts of study and countless calculations on the GT663 to determine ideal locations to install speakers to obtain obstruction-free sound transmission.