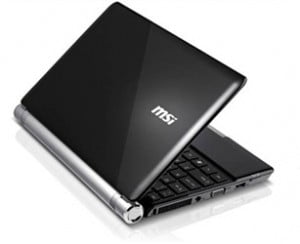 Since its unveiling in 2008, the MSI Wind U series, which is characterized by superior quality, beautiful exteriors, and ideal size, has won acclaim from news media and consumers the world over. With over one million units sold, the U series has received more than 130 awards, from leading magazines around the world, including PC World, PC Magazine, The Inquirer, Laptop Magazine, CNET, and CHIP.

Dazzling new members of the MSI Wind U netbook family this year include the beautifully crafted and stylish U160 and U135 which are specially designed in terms of size and functions, to meet the needs of the user. When they hit the market, the U160 and U135 immediately drew world media attention and magazines like Engadget, CNET, and PC World related articles on them. The ultra lean, mean, and pristine U160, which boasts 15 hours of battery power, received Germany’s iF Product Design Award for 2010—the design world’s equivalent of an Oscar. After carrying out extensive testing on the U160, Laptop Magazine wrote up a lengthy report praising its attractive and comfortable Chiclet keyboard, seamless touchpad, and extended battery life. The story pointed out that even after a long, heavy workout, the U160 remains cooler than similar models sold by other manufacturers and that despite the ultra thin/light body, and heat elimination isn’t a problem. This is doubtless a feather in the cap of MSI’s outstanding notebook design team.

The MSI Wind U135 has received even more awards since it became available on the market. In just a few short months, it snatched dozens of big awards, such as “Editor’s Choice,” “Top 10 Killer Netbook for 2010,” “Recommended Award,” and “Best Product of the Year Award,” from major news media from around the world, including Germany’s Notebook Check, CNET, PC World, and CHIP. After testing the U135, Australia’s PC World announced that consumers will fall in love with the excellent quality, attractive exterior, well crafted Chicklet keyboard, and the fact that even after five hours of heavy use, the outstanding heat dissipation capabilities leave this netbook a cool cucumber. The magazine not only honored the U135 with “Editor’s Choice,” the article recommended that individuals in the market for a netbook consider buying the U135, declaring it to have excellent craftsmanship, a complete array of ports, and comprehensive wireless connectivity.

Other models in the MSI Wind U series, including the 12″ U230, U210, and U200, are also seeing a great many positive articles and are highly commended by PC World, CHIP, PC Magazine, and CNET. PC Advisor of the UK tested them and gave the U210 with a “Recommended Award” in March of 2010. Obviously, MSI’s “Insist on the Best” policy applies to its Wind U series of notebooks as not only are they attractive and powerful, their reputation for quality and reliability is being spread very quickly by both media and consumers alike around the planet.