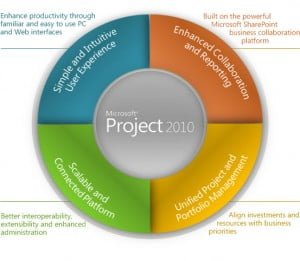 Microsoft Project 2010 helps organizations reduce costs by enabling smarter and more informed decisions about budgeting and resource allocation. Through a dramatically enhanced user experience, Microsoft Project 2010 also drives team productivity with integration across familiar Microsoft technologies including Microsoft SharePoint Server and Microsoft Exchange Server. This integration allows a powerful business collaboration platform and proven project and portfolio management to result in a familiar, connected environment for customers to manage the simplest or the most complex projects.

Microsoft Project 2010 is part of the next wave of Microsoft Office-related products, which includes Microsoft Office 2010, Microsoft SharePoint Server 2010, Microsoft Exchange 2010 and Microsoft Visio 2010, and is designed to give people a consistent experience across devices, making it easier to create and edit documents and collaborate from any location.