Microsoft Surface (Codename: Milan), is a forthcoming Multi-touch product from Microsoft which is developed as a software and hardware combination technology that allows a user, or multiple users, to manipulate digital content by the use of natural motions, hand gestures, or physical objects. It was announced on May 29, 2007 at D5 conference, and is expected to be released by commercial partners in spring 2008.[1] Initial customers will be in the hospitality businesses, such as restaurants, hotels, retail, and public entertainment venues.

Surface is essentially a Windows Vista PC tucked inside a table, topped with a 30-inch reflective surface in a clear acrylic frame. A projector underneath the surface projects an image onto its underside, while five cameras in the machine’s housing record reflections of infrared light from human fingertips. The camera can also recognize objects placed on the surface if those objects have specially-designed “tags” applied to them. Users can interact with the machine by touching or dragging their fingertips and objects such as paintbrushes across the screen, or by placing and moving tagged objects.

Surface has been optimized to respond to 52 touches at a time. During a demonstration with a reporter, Mark Bolger, the Surface Computing group’s marketing director, “dipped” his finger in an on-screen paint palette, then dragged it across the screen to draw a smiley face. Then he used all 10 fingers at once to give the face a full head of hair.

In addition to recognizing finger movements, Microsoft Surface can also identify physical objects. Microsoft says that when a diner sets down a wine glass, for example, the table can automatically offer additional wine choices tailored to the dinner being eaten.

Prices will reportedly be $5,000 to $10,000 per unit.[2] However Microsoft said it expects prices to drop enough to make consumer versions feasible in 3 to 5 years.[3]

The machines, which Microsoft debuted May 30, 2007 at a technology conference in Carlsbad, California, were set to arrive in November 2007 in T-Mobile USA stores and properties owned by Starwood Hotels & Resorts Worldwide Inc. and Harrah’s Entertainment Inc. But with delays in developing custom applications for each of the partners, it will take until spring 2008 before the machines start showing up at these locations.[4]

The technology behind Surface is called Multi-touch. It has at least a 25-year history,[5] beginning in 1982, with pioneering work being done at the University of Toronto (multi-touch tablets) and Bell Labs (multi-touch screens). The product idea for Surface was initially conceptualized in 2001 by Steven Bathiche of Microsoft Hardware and Andy Wilson of Microsoft Research. [6] In October 2001, a virtual team was formed with Bathiche and Wilson as key members, to bring the idea to the next stage of development.

In 2003, the team presented the idea to the Microsoft Chairman Bill Gates, in a group review. Later, the virtual team was expanded and a prototype nicknamed T1 was produced within a month. The prototype was based on an IKEA table with a hole cut in the top and a sheet of architect vellum used as a diffuser. The team also developed some applications, including pinball, a photo browser and a video puzzle. Over the next year, Microsoft built more than 85 early prototypes for Surface. The final hardware design was completed in 2005. 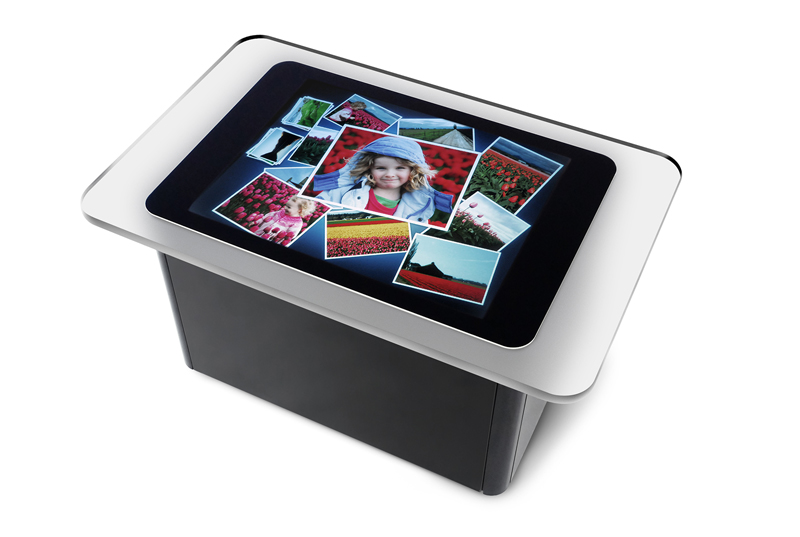 A similar concept was used in the 2002 Science Fiction movie Minority Report and in the 2005 Science Fiction movie The Island, by Sean Bean’s character “Merrick”. As noted in the DVD commentary, the director Michael Bay stated the concept of the device came from consultation with Microsoft during the making of the movie. One of the film’s technology consultant’s associates from MIT later joined Microsoft to work on the Surface project.[7]

Surface was unveiled by Microsoft CEO Steve Ballmer on May 30, 2007 at The Wall Street Journal’s D: All Things Digital conference in Carlsbad, California.[8] Surface Computing is part of Microsoft’s Productivity and Extended Consumer Experiences Group, which is within the Entertainment & Devices division. The first few companies to deploy Surface will include Harrah’s Entertainment, Starwood Hotels & Resorts Worldwide, T-Mobile and a distributor, International Game Technology.[9]

Direct interaction refers to the user’s ability to simply reach out and touch the interface of an application in order to interact with it, without the need for a mouse or keyboard. Multi-touch contact refers to the ability to have multiple contact points with an interface, unlike with a mouse, where there is only one cursor. Multi-user is a benefit of multi-touch — several people can orient themselves on different sides of the surface to interact with an application simultaneously. Object recognition refers to the device’s ability to recognize the presence and orientation of tagged objects placed on top of it.

The technology allows non-digital objects to be used as input devices. In one example, a normal paint brush was used to create a digital painting in the software.[10] This is made possible by the fact that, in using cameras for input, the system does not rely on restrictive properties required of conventional touchscreen or touchpad devices such as the capacitance, electrical resistance, or temperature of the tool used (see Touchscreen).

The computer’s “vision” is created by a near-infrared, 850-nanometer-wavelength LED light source aimed at the surface. When an object touches the tabletop, the light is reflected to multiple infrared cameras with a net resolution of 1280 x 960, allowing it to sense, and react to items touching the tabletop.

Surface will ship with basic applications, including photos, music, virtual concierge, and games, that can be customized for the customers.[11]