Like salt used as a preservative, high concentrations of dissolved minerals in the wet, early-Mars environment known from discoveries by NASA’s Opportunity rover may have thwarted any microbes from developing or surviving.

“Not all water is fit to drink,” said Andrew Knoll, a member of the rover science team who is a biologist at Harvard University, Cambridge, Mass.

Opportunity and its twin, Spirit, began their fifth year on Mars last month, far surpassing their prime missions of three months. Today, at a meeting of the American Association for the Advancement of Science in Boston, scientists and engineers discussed new observations by the rovers, recent analysis of some earlier discoveries, and perspectives on which lessons from these rovers’ successes apply to upcoming missions to Mars. “The engineering efforts that have enabled the rovers’ longevity have tremendously magnified the science return,” said Steve Squyres of Cornell University, Ithaca, N.Y., principal investigator for the rovers’ science payload. “All of Spirit’s most important findings, such as evidence for hot springs or steam vents, came after the prime mission.” 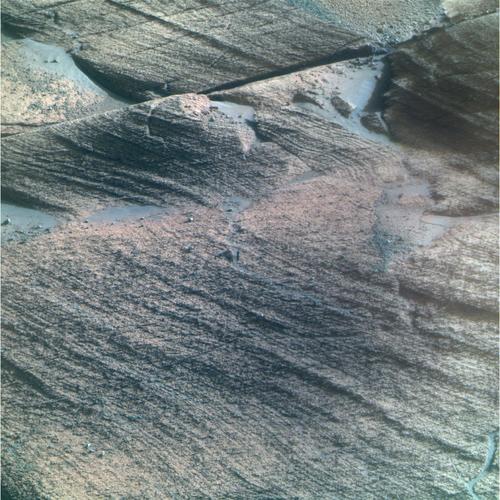 Opportunity spent recent months examining a bright band of rocks around the inner wall of a crater. Scientists previously hypothesized this material might preserve a record of the ground surface from just before the impact that excavated the crater. Inspection suggests that, instead, it was at the top of an underground water table, Squyres reported.

Experiments with simulated Martian conditions and computer modeling are helping researchers refine earlier assessments of whether the long-ago conditions in the Meridiani area studied by Opportunity would have been hospitable to microbes. Chances look slimmer. “At first, we focused on acidity, because the environment would have been very acidic,” Knoll said. “Now, we also appreciate the high salinity of the water when it left behind the minerals Opportunity found. This tightens the noose on the possibility of life.”

Conditions may have been more hospitable earlier, with water less briny, but later conditions at Meridiani and elsewhere on the surface of Mars appear to have been less hospitable, Knoll said. “Life at the Martian surface would have been very challenging for the last 4 billion years. The best hopes for a story of life on Mars are at environments we haven’t studied yet — older ones, subsurface ones,” he said.

NASA’s current rovers and orbiters at Mars pursue the agency’s “follow the water” theme for Mars exploration. They decipher the roles and fate of water on a planet whose most striking difference from Earth is a scarcity of water. “Our next missions, Phoenix and Mars Science Laboratory, mark a transition from water to habitability — assessing whether sites where there’s been water have had conditions suited to life,” said Charles Elachi, director of NASA’s Jet Propulsion Laboratory, Pasadena, Calif. “Where conditions were habitable, later missions may look for evidence of life.”

Elachi cited the achievements of Spirit and Opportunity. “They have worked 16 times longer than planned, driven 20 times farther than planned, and, most important, found diverse geological records of the effects of water in ancient Martian environments,” he said. “We must not let these successes lull us into thinking this type of exploration is easy. Fifty years into the Space Age, we are still in the golden age of robotic exploration of our solar system, when each mission is unprecedented in some way as we push the limits of what is possible. Each mission presents new challenges.”

The Phoenix lander, on course to reach Mars on May 25, will assess habitability of a shallow subsurface environment of icy soil farther north than any earlier mission has landed. It revives technology from missions launched before Spirit and Opportunity. The following mission, the Mars Science Laboratory rover, will incorporate many lessons from the current rovers, said that project’s manager, Richard Cook of JPL. “The next rover will be much bigger to carry the instruments necessary for meeting its goals, but it would be laughable to consider doing Mars Science Laboratory without the experience gained from doing the Mars Exploration Rovers,” he said.

The Mars Science Laboratory rover will weigh about four times as much as Spirit or Opportunity. “There’s no way we could use an airbag landing,” said JPL’s Rob Manning, chief engineer for the future rover. Instead, a rocket-powered hovering stage will lower it to the surface on a tether. Lessons from Spirit and Opportunity will come into play when it starts driving, though. “With the current rovers, we’ve learned we can trust the autonomous navigation technology to a level we never expected, so now we can include that as a capability in our mission design for Mars Science Laboratory,” Manning said.