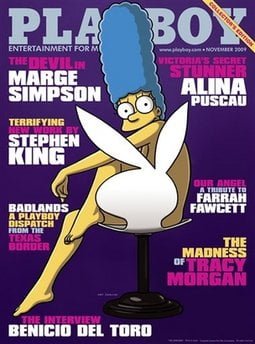 Marge Simpson has done something that Homer might not like but will make Bart the proudest kid in his school: She’s posed for Playboy magazine.

After more than a half century featuring women like Marilyn Monroe, Cindy Crawford and the Girls of Hooters on its cover, Playboy has for the first time given the spot to a cartoon character.

And the magazine is giving the star of “The Simpsons” the star treatment, complete with a data sheet, an interview and a 2-page centerfold.

The magazine’s editorial director, James Jellinek, won’t say exactly how much of Marge will show in the November edition that hits newsstands on Oct. 16 — or whether she lets that big pile of blue hair down. But, he said, “It’s very, very racy.”

But he stressed that the mother of three — the youngest a baby, by the way — has a lot to be proud of.

“She is a stunning example of the cartoon form,” he said on Friday at the magazine’s headquarters in Chicago, appearing both pleased and surprised at the words coming out of his mouth.

For Playboy, which has seen its circulation slip from 3.15 million to 2.6 million since 2006, putting Marge on the cover was designed to attract younger readers to a magazine where the median age of readers is 35, while not alienating older readers.

“We knew that this would really appeal to the 20-something crowd,” said Playboy spokeswoman Theresa Hennessey.

The magazine also hopes to turn the November issue into a collectors’ item by featuring Marge, sitting on a chair in the shape of the iconic Playboy bunny, on the cover of only the magazines sold in newsstands. Subscribers get a more traditional model on the cover.

“It’s so rare in today’s digital age where you have the opportunity to send people to the newsstand to pick something up,” Jellinek said.

Playboy even convinced 7-Eleven to carry the magazine in its 1,200 corporate-owned stores, something the company has only done once before in more than 20 years.

For those who do collect the magazine — and they’re out there — the cover will bring to mind another first for the magazine that occurred in 1971 when a black woman appeared on the cover in exactly the same pose and, like Marge, smiling under an impressive head of hair.

“We knew it was something all of our readers would get a kick out of,” said Hennessey.

Jellinek said putting Marge on the cover, while unusual, made perfect sense. For one thing, the cover celebrates the 20th anniversary of the TV show. Further, he said there was an episode in which “Marge bears all,” which suggested the at she, or at least the people who drew her, would be comfortable with the Playboy treatment.

Perhaps most important, the idea seemed like a good one to the magazine’s founder, Hugh Hefner.