Malaysian scientists is expected to be appointed as Alien intermediary 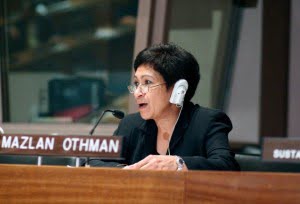 A Malaysian scientists is expected to be appointed as “world leader” with responsibility for dealing any alien visitors.

Mazlan Othman, an astrophysicist, is to be given the task of co-ordinating the response if extraterrestrials make contact.

Should aliens land on Earth and ask: “Take me to your leader” they would be directed to Mrs Othman.

She will set out the details of her proposed new role at a Royal Society conference in Buckinghamshire next week.

The 58 year-old is expected to tell delegates that the proposal has been prompted by the recent discovery of hundreds of planets orbiting other stars, which is thought to have raised the probability of discovering extraterrestrial life.

Mrs Othman is currently head of the UN’s Office for Outer Space Affairs.

In a recent talk to fellow scientists, she said: “The continued search for extraterrestrial communication sustains the hope that some day human kind will received signals from extraterrestrials.

“When we do, we should have in place a co-ordinated response that takes into account all the sensitivities related to the subject. The UN is a ready-made mechanism for such co-ordination.”

Professor Richard Crowther, of the U.K. space agency who leads delegations to the UN, said: “Othman is absolutely the nearest thing we have to a ‘take me to your leader’ person”.