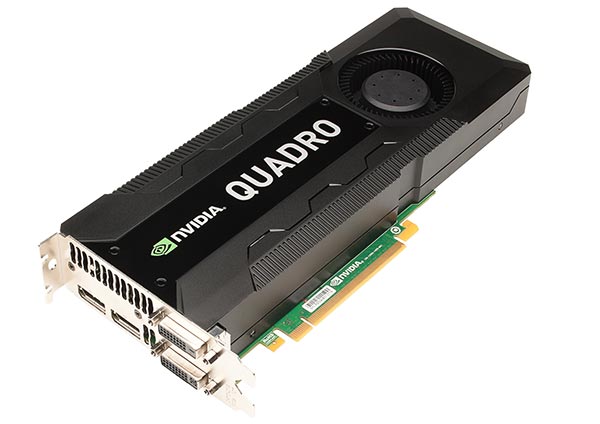 Mac professionals will benefit from dramatically improved graphics performance and productivity with today’s announcement of the NVIDIA® Quadro® K5000 for MacPro systems.

Based on NVIDIA Kepler™ architecture — the world’s fastest, most efficient GPU design — the Quadro K5000 for Mac is the most powerful professional-class GPU ever for the Macintosh, delivering unprecedented visualization and computation capabilities for designers and digital content creators.

Key features of the NVIDIA Quadro K5000 GPU for Mac include:

“The NVIDIA Quadro K5000 has great OpenGL and CUDA performance, so it’s ideal to use as a shared GUI and image processing GPU in DaVinci Resolve 9,” said Grant Petty, chief executive officer, Blackmagic Design. “Like many artists who use DaVinci Resolve, colorists seek the highest performance possible from their systems, and with just one of the new Kepler GPUs our users will be able to work with 4K imagery on their Mac Pros in real time.”

“Quadro K5000 for Mac will have a transformational impact on the digital content creation workflow,” said Greg Estes, media & entertainment industry executive at NVIDIA. “We’re giving Mac Pro users the most powerful professional GPU ever for the Mac, with features and performance that will make a substantial difference in their workflows and allow them to create digital content at speeds never before possible.”

NVIDIA Quadro GPUs are designed, built and tested by NVIDIA to provide the superb reliability, compatibility and dependability that professionals require, and Quadro GPUs are certified and recommended by leading software application providers worldwide.

Availability and Pricing
The NVIDIA Quadro K5000 for Mac is planned to be available later this year from select Apple resellers and system integrators, and from authorized distribution partners, including PNY Technologies in the Americas and Europe, ELSA in Japan and Leadtek in Asia Pacific. Estimated pricing starts at $2,249.