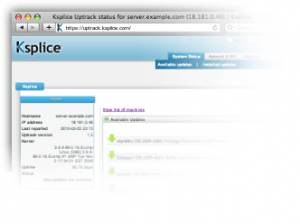 The offering, which is free of charge, makes Fedora the latest Linux distribution to instantly install crucial updates and security patches without any downtime.

Hundreds of the world’s cloud-computing providers, Web hosting firms and enterprise Linux installations use Ksplice Uptrack to update their kernels seamlessly, without disruption to customers. Today’s news adds the same capability for millions of Fedora users.

“Ksplice was originally developed on Fedora in the first place,” said Jeff Arnold, Ksplice’s founder and chief executive. “We’re thrilled to contribute our service back to the Fedora community for free.”

“Ksplice Uptrack is an interesting technology that promises to make it easier for our users to keep Fedora installations up-to-date,” said Jared Smith, Fedora Project Leader. “We appreciate Ksplice’s participation in the Fedora community.”

Major Linux distributions ask their users to install a kernel update roughly once each month. Before Uptrack, each such update required a reboot. Until a system can be updated, it remains vulnerable to security flaws. By allowing users to install kernel updates without downtime, Uptrack slashes the cost of system administration and dramatically increases compliance with security updates.

Ksplice has contributed its software to the Fedora Project for integration into future versions of the distribution itself. In addition to Fedora, Ksplice Uptrack is available for users of seven other leading versions of Linux: Red Hat Enterprise Linux, Parallels Virtuozzo Containers, CloudLinux, Ubuntu, Debian GNU/Linux, CentOS, and OpenVZ. The service for Fedora and Ubuntu Desktop is free
of charge. For other distributions, the subscription fee starts at $3.95 per system a month, after a 30-day free trial.