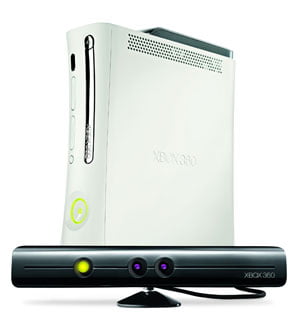 Get ready to Kinect to fun entertainment for everyone. Microsoft Corp. today capped off a two-day world premiere, complete with celebrities, stunning physical dexterity, and news from a galaxy far, far away, to reveal experiences that will transform living rooms in North America, beginning Nov. 4. Kinect will roll out to the rest of the world thereafter.

Opening with a magical Cirque du Soleil performance on Sunday night attended by Hollywood’s freshest faces, Microsoft gave the transformation of home entertainment a name: Kinect for Xbox 360. Then, kicking off the Electronic Entertainment Expo (E3), Xbox 360 today invited the world to dance, hurdle, soar and make furry friends for life — all through the magic of Kinect — no controller required.

“With ‘Kinectimals’ and ‘Kinect Sports,’ ‘Your Shape: Fitness Evolved’ and ‘Dance Central,’ your living room will become a zoo, a stadium, a fitness room or a dance club. You will be in the center of your entertainment, using the best controller ever made — you,” said Kudo Tsunoda, creative director for Microsoft Game Studios.

Microsoft and LucasArts also announced that they will bring Star Wars® to Kinect in 2011. And, sprinkling a little fairy dust on Xbox 360, Disney will bring its magic to Kinect as well.

“Xbox LIVE is about making it simple to find the entertainment you want, with the friends you care about, wherever you are. Kinect is about making that experience more natural and engaging than ever before,” said Marc Whitten, corporate vice president of Xbox LIVE at Microsoft. “Once you experience your movies, music, sports and games with Xbox LIVE and Kinect, you won’t ever want to go back.”

Using Kinect is as simple as stepping in front of the sensor. It recognizes you, responds to your gestures, listens to your voice, and, best of all, it works with every Xbox 360.1

Offering so much more than just games, Kinect for Xbox 360 takes your entertainment to the next level. Beginning this holiday, the Kinect Hub puts your favorite movies, TV programs, music and live sports all in one place — completely controller-free.

Jump right into a movie in instant-on HD in 1080p or your favorite college bowl game by simply saying “Xbox, play,” or browse your entire song library with a wave of a hand. Kinect also creates new ways for friends and family to have fun together.

With Video Kinect2, share a smile with distant friends and family as you open a window into living rooms around the world. Providing entertainment for everyone, with the power of Kinect, the Xbox LIVE experience is more intuitive, social and interactive than ever before.

Xbox 360 is a premier home entertainment and video game system. This November, with the addition of Kinect Xbox 360 will forever transform social gaming and entertainment with a whole new way to play — no controller required. Xbox 360 is also home to the best and broadest games as well as the largest on-demand library of music, standard- and high-definition movies, TV shows and digital games, all in one place. The entertainment center of the living room, Xbox 360 blends unbeatable content with the leading social network of 25 million Xbox LIVE members to create a limitless entertainment experience that can be shared at home or across the globe. More information about Xbox 360 can be found online at http://www.xbox.com.