Is Intel’s Core 2 Duo Processor Worth the Hype?

In the months leading up to the release of Core 2 Duo processor – also referred to as “Conroe” for desktops – many questions remained unanswered. Did Intel make the necessary changes to compete with AMD’s processor advantage?

The Core 2 Duo is the successor of NetBurst micro-architecture that has powered most Intel processors since 2000. The Pentium brand name – created in 1993 – no longer exists with the release of Core 2. Also, this is the first reunion of Intel’s notebook and desktop product lines since Pentium M was released apart from Pentium 4 in 2003.

Core 2 Duo technology allows for a faster chip – up to 40 percent faster with 40 percent less power consumption – than the Pentium EE because of new techniques such as Smart Cache and Wide Dynamic Execution (WDE).

Dynamic cache allocation within Intel’s Smart Cache technology efficiently apportions the cache memory according to what is needed by each execution core. This results in an optimized performance because the Intel Core Duo processor enables increased cache utilization.

According to Intel, WDE enables delivery of more instructions per clock cycle to improve execution time and energy efficiency. Every execution core is 33% wider than previous generations, allowing each core to fetch, dispatch, execute and retire up to four full instructions simultaneously.

The current extreme version – the X6800 – features an unlocked multiplier, which means the clock multiplier can be adjusted higher or lower than 11.0x (derived from the 11:1 ratio of the maximum Intel tested bus-to-core process). That technology for a retail Intel chip is treading new ground. The X6800 has shown the ability to be over-clocked to 3.4 GHz on regular heat-sink/fan air cooling. The over-clocking is a first for Intel and a big win for hands on users like high end gamers.

Benchmarking tests in multimedia and gaming have proven that the X6800 can lead the best AMD processor by up to 36% in performance.

The new chips are also smaller and less expensive to produce than Intel’s Pentium D900 series, and they are much smaller than the Athlon 64 X2s despite packing more transistors. The smaller die and greater amount of manufacturing facilities creates more pricing flexibility for Intel than AMD. 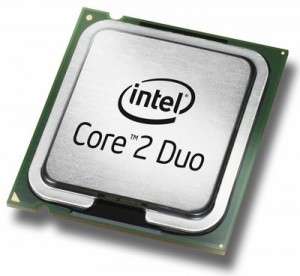 Upgraders and system manufacturers can place the Core 2 Duo chips into some current Pentium D/EE (LGA775) motherboards with some BIOS/Firmware updates.

One physical desktop can be turned into several virtual systems (all running different applications and operating systems). As an example: an individual can play a game while an FTP server is executed and a Web server is operated on another system. Meanwhile, at the same time, a database can be worked on.

Another important feature is the security platform the Core 2 Duo chips provide. Before the release of the Core 2 Duo processors, only business PCs had Trusted Platform Module (TPM) protection built in to the system. Now, with the Core 2 Duo, all PCs have TPM. Within the hardware, all passwords, logons and personal data are protected from hackers, spyware and identity thieves.

The Allendale, a codename for stripped-down versions of the Conroe processors with 2MB of L2 cache, and Merom, with largely the same features as the Conroe with an emphasis on lower power consumption to enhance the life of a notebook battery.

In summary, Intel’s release of the Core 2 Duo processor comes as advertised, both fast and energy-efficient. With more enhancements of Core 2 on the way – and AMD preparing to launch its answer to Conroe with a “4×4” chip (systems can use a pair of high-end dual-core chips) – what is considered fast now will be slow in the future.

For more information or assistance in selecting the right custom computer or storage solution please contact Terian Solutions at 1-800-876-8649 or visit our website at http://www.terian.com.