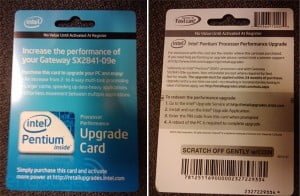 There are only 2 main player in the CPU industry, Intel and AMD. While Intel is well know of their line of hardware locked CPU, AMD is more friendly to overclockers.

The new Intel Pentium G6951 processor have the ability to unleashed the true potential of the CPU using software by unlock extra threads and cache BUT it come with the tag price. Intel is asking their customer to pay in order to unlock the CPU just like some games that allow to unlock extra special weapon and feature while the truth is it already there.

Hardware.info got the early sample of the CPU and discovered it was actually a full 1MB of L3 cache that’s enabled plus HyperThreading support. [via]