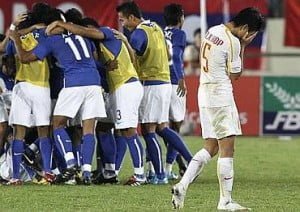 Malaysia finally ended its 20-year gold drought in the SEA Games men’s football competition, when it defeated Vietnam 1-0 in the final played at the Main Stadium of the National Sports Complex in Vientiane on Thursday.

The National Under-23 boys, who came here as non-medal prospects, pulled off one of the biggest upsets of the Games to win the gold.

Malaysia last won the football gold in the Kuala Lumpur SEA Games in 1989, with a 1-0 victory over Singapore.

The ‘winner’ came courtesy of an own goal by Vietnam’s Mai Xuan Hop’s in the 84th minute of a toughly-fought final. The football gold medal was also Malaysia’s 40th gold medal in Vientiane.

The victory was all the more sweeter as the Malaysians had lost 1-3 to Vietnam in a group match on Dec 6.

Earlier, the young Malaysians had knocked out defending champions Thailand 2-1 in the group stage to win a place in the semi-finals.