GIGABYTE First to Market with AM3+ “Black Socket” Motherboards 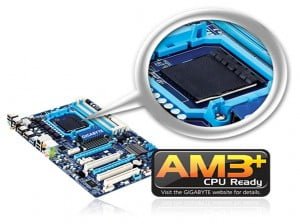 GIGABYTE INC., a leading manufacturer of motherboards and graphics cards today announced a new line of 16 “Black Socket” motherboards previously unveiled at CeBIT 2011 that offer support for AMD’s next generation , 32nm AM3+ CPUs and are based on current generation AMD 800/700 series chipset-based motherboards.

Wanting to ensure users their motherboard is able to take advantage of all the performance enhancements that AMD’s upcoming AM3+ CPUs have to offer, GIGABYTE has equipped their entire line of AM3+ CPU ready motherboards with a new black colored socket, making it easy to spot for AM3+ support. In addition, GIGABYTE “Black Socket” series offer full backwards compatibility with AMD’s current generation AM3 socket CPUs, allowing for painless migration to the AM3+ CPUs when they become available.