Genesis Climber Mospeada (機甲創世記モスピーダ, Kikō Sōseiki Mosupīda?) (literally “Armored Genesis Mospeada”) is an anime science fiction series created by Shinji Aramaki and Hideki Kakinuma. The 25-episode television series ran from late 1983 to early 1984 in Japan. MOSPEADA stands for Military Operation Soldier Protect Emergency Aviation Dive Auto, one of the transformable motorcycle-armors the series features. The other primary mecha featured in the show is the three-form transformable fighter called the Armo-Fighter AFC-01 Legioss, which is very much similar to the VF-1 Valkyrie variable fighter in The Super Dimension Fortress Macross. 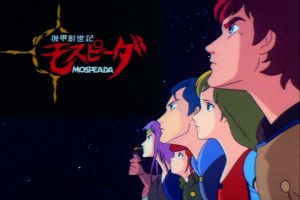 Story
The story takes place in the 21st century. Due to the fact that pollution was becoming a major problem, scientists had developed the use of hydrogen fuel called “HBT” as an alternative to fossil fuels. At this time humans have colonized Mars in search of new place to call home as a result of overpopulation. In the year 2050, a mysterious alien race called the Inbit invaded the Earth. Unable to fight the Inbits, Earth became desolate with only a few pockets of human beings scattered throughout the planet. Many of the refugees escape aboard a few remaining shuttles to seek shelter on the Moon. The Inbit set up their main base of operations in the Great Lakes area of North America called “Reflex Point”.

However, the Mars colony, dubbed the Mars Base, did not forget about the plight of Earth. Troops were sent in to fight the Inbits from the Moon, only to fail miserably. The Inbits did not attack Mars, and showed no interest towards the other planets. Surprisingly the Inbit show no hostility towards humans unless they are directly provoked. The Inbit can also sense the presence of HBT, and use of the fuel is limited under their supervision, as HBT is a common component in weapons technology. Overnight the Mars base becomes a gigantic military machine, producing vast amounts of advanced weaponry and trained troops. In 2080, Mars Base sent in the next wave of troops. Although equipped with more technologically advanced equipment and transformable mecha, the attempt to recapture the homeworld was nonetheless a failure.

Three years later, Mars Base launched another attack called the Second Earth Recapture Force. One of the troops happened to be Lieutenant Stick Bernard. The mission proved to be unsuccessful as it did three years ago and Stick’s fiancée Marlene was killed. After losing her, Stick was forced to crash into Earth, landing in South America. At first, he was sorrowful and depressed at the death of his beloved Marlene. After seeing the holographic recording of his dead betrothed, Stick swore an oath of vengeance. In his quest to reach the Reflex Point on North America, the Inbit ‘hive’, he meets other characters of the show, forming a group of ragtag freedom fighters on a goal to rid the planet of the Inbits.

As the plot unravels, the purpose of the Inbits invasion is revealed. Their sole purpose of coming to the planet was because Earth provides them a suitable place to evolve into more complex beings. However, little did the Inbits know that their endeavor actually threatens to cause the extinction of both humans and Inbits. And thus, it is up to Stick and his group, with the help of human-like Inbits (Aisha and Solzie), to convince the supreme ruler of the Inbit, the Refles, to flee from Earth.