GeForce GTX 680 for PC Gamers Is Fastest, Most Efficient GPU Ever Built; GeForce GT 640M for Notebooks Puts the “Ultra” in Ultrabooks 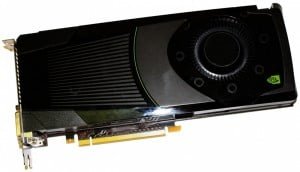 The result of some 1.8 million man-hours of work over five years, the Kepler architecture’s first offerings bring unprecedented technical capabilities to both gaming desktops and Ultrabooks.

For desktop gaming, the NVIDIA® GeForce® GTX 680 GPU provides a faster, smoother and richer experience. For notebooks, the new lineup of GeForce 600M GPUs puts the “ultra” in Ultrabooks, enabling smaller, more powerful designs than were previously possible. Both are available immediately.

“The Kepler architecture stands as NVIDIA’s greatest technical achievement to date,” said Brian Kelleher, senior vice president of GPU engineering at NVIDIA. “It brings enormous performance and exceptional efficiency. Gamers will love the GTX 680’s performance, as well as the fact that it doesn’t require loud fans or exotic power supplies. Ultrabook users will love the GT 600M family for its performance and power efficiency.”

Kepler is based on 28-nanometer (nm) process technology and succeeds the 40-nm NVIDIA Fermi architecture, which was first introduced into the market in March 2010.

Compared with the closest competitive product, the GeForce GTX 680 GPU is more than 300 percent faster in DirectX 11 tessellation performance(1) and up to 43 percent faster in cutting-edge games such as Elder Scrolls V: Skyrim(2), yet consumes 28 percent less power(3). It also provides twice the performance per watt of the GeForce GTX 580, the flagship Fermi-based processor that it replaces.

Setting the standard for future enthusiast-class GPUs, the GeForce GTX 680 is built on an array of new technologies, including:

Kelt Reeves, president of Falcon Northwest, a leading producer of high-end gaming systems, said: “The GTX 680 lays down what should be whiplash-inducing speed at the sound of a whisper. Even at full throttle, it doesn’t heat up. In the immortal words of Obi-Wan describing a lightsaber, it’s ‘an elegant weapon for a more civilized age.'”

Mark Rein, vice president of Epic Games, creators of the award-winning Unreal Engine and billion-dollar “Gears of War” franchise, said: “The GTX 680 is amazing and completely redefines what an enthusiast-class GPU is. We have already shown outstanding success with the GTX 680, recently presenting our real-time Samaritan demonstration running on it along with a special preview of Unreal Engine 4 for select developers.”

GeForce 600M GPU Family: Putting the “Ultra” In Ultrabooks
The NVIDIA GeForce 600M family of GPUs, when paired with the latest processor technology from Intel, enables Ultrabook and notebook PC designs that are thin, light and fast. Technological advances that set them apart from the competition include:

“The Acer Aspire Timeline Ultra M3 brings a superior level of performance to the Ultrabook category,” said Sumit Agnihotry, vice president of product marketing at Acer America. “With a GeForce GPU onboard, our thin and light Ultrabook does everything our customers want it to do, with no compromises.”

Rene Haas, general manager of notebook products at NVIDIA, said: “Customers are about to see notebook manufacturers unveil a host of Ultrabooks that are truly worthy of the ‘ultra’ moniker. The more efficient and powerful GeForce 600M GPUs will raise performance from the Ultrabook segment all the way up to gaming notebooks. And they will be the most popular discrete GPUs used with Intel’s upcoming Ivy Bridge processor.”