F-16 collided in the air 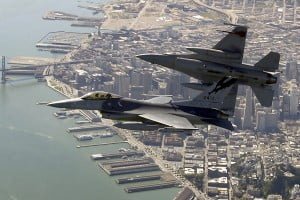 Debris and an oil slick were spotted in the Atlantic off the South Carolina coast as the search expanded Friday for an F-16 fighter pilot whose jet collided with another during night training exercises.

“We did have a report of an oil sheen which might be consistent with fuel from the fighter jet itself and we have also had a report of a small amount of debris,” said Capt. Michael McAllister, commander of Coast Guard Sector Charleston.

The search was expanded from 750 to 1,300 square miles as Coast Guard and Air Force aircraft joined vessels from the Coast Guard, Navy, law enforcement and commercial shippers looking for Capt. Nicholas Giglio. He is based at Shaw Air Force Base in Sumter.

“In the Air Force, we’re a family and when we lose one of our airmen, it’s losing one of our family members. Naturally those that work with Capt. Giglio every day are pretty shook up about it. It’s the right thing to do to stand down, take a day off from our normal routine and reflect on what happened, reflect on the loss.”

But he stressed the search was “indeed still a rescue mission.”

McAllister, who said he did not know exactly what the debris was, said there would have been a tracking beacon both on the pilot and his ejection seat, but no signal had been picked up.

“We presume there is a pilot who is in the water and needs to be rescued,” he said. “The lack of a beacon might indicate that the pilot didn’t safely eject or that there was an equipment malfunction. It makes it more difficult for us since we don’t have the beacon to home in on.”

The planes collided Thursday around 8:30 p.m. about 40 miles off the South Carolina coast, said Senior Master Sgt. Brad Fallin at Shaw Air Force Base. Both jets, based at Shaw, are single-seat aircraft.

The jet piloted by Capt. Lee Bryant landed safely at Charleston Air Force Base, Fallin said. Bryant was examined at the base but suffered no injuries and was released. By Friday afternoon, Bryant was back at Shaw, Guastella said.

Bryant’s plane “was indeed damaged significantly, but it was still flyable and he was able to return it to Charleston,” he said, declining to specify what was damaged or estimate its cost.

Two other aircraft from the 77th Fighter Squadron were training nearby. When those pilots learned of the collision, they quickly helped Bryant assess damage to his plane and get back to Charleston and also looked for Giglio, Guastella said.

McAllister said visibility was good and winds were about 25 mph at the time of the collision. He said he did not think it was raining at the time.

Water temperatures in the crash area were about 75 degrees and most people could survive 24 hours, he said.

“Given that this was a military member they would probably be in good shape and have a will to live. We would expect it would be quite a bit more than the 24 hours,” McAllister said.

“Obviously, our hopes thoughts and prayers are with the family,” Clark said.

Guastella said the collision took place toward the end of the 80-minute mission, which is conducted two to five times a week by Shaw-based pilots.

Kildron said Giglio has been a fighter pilot for 18 months but hadn’t been at Shaw very long.

“During that short time, he’d distinguished himself as being a fine F-16 fighter pilot, and overall, personality-wise and just attitude, a great guy, and I’m happy to have him as part of my team,” he said.

The 77th Fighter Squadron is training for deployment to Iraq early next year, Kildron said.

The pilots’ ages were not immediately available, nor was Bryant’s home town.

Earlier this week, Shaw Air Force Base announced that pilots would be conducting nighttime exercises to allow pilots to fly with night vision equipment and practice tactics critical to surviving in combat.