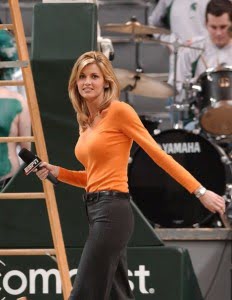 Erin Andrews (born May 4, 1978, in Lewiston, Maine) is an American sportscaster. She currently works for ESPN as a sideline reporter at sporting events.

Andrews has become an Internet sensation,as she is popular among male sports fans for her physical appearance and knowledge of sports.In 2007 and 2008, she was voted “America’s Sexiest Sportscaster” by Playboy Magazine.

Andrews was born in Lewiston, Maine. She moved to Tampa, Florida as a young girl when her father Steve Andrews, a six-time Emmy Award winner, took a job as an investigative journalist for WFLA-TV. After attending Bloomingdale High School near Tampa, Andrews graduated in 2000 from the University of Florida with a degree in telecommunications. While there she was a member of the Zeta Tau Alpha sorority. Andrews was also a member of the Dazzlers, the Gator basketball dance team, from 1997–2000.

Andrews began her career with FSN Florida as a freelance reporter from 2000–01, before serving as a Tampa Bay Lightning reporter for the Sunshine Network from 2001–02. She then worked as a studio host for Turner Sports from 2002–04, covering the Atlanta Braves and college football for TBS and Atlanta Thrashers and Atlanta Hawks for Turner South.

Andrews joined ESPN in May 2004 as a reporter for the network’s National Hockey League coverage.[1] Since the 2004 season, she has served as sideline reporter for the ESPN College Football Saturday telecast, the Saturday Primetime college basketball game and Big Ten college basketball coverage. In 2005, she added Major League Baseball sideline reporting to her duties. She also provides reports and features on Great Outdoor Games coverage, covers Men’s college baseball, and is a familiar sight during the College World Series. On July 8, 2009, Andrews was struck by a foul ball in the chin. The ball was hit by Alex Cora of the New York Mets. She was rushed to the hospital, but she only suffered bruises.

On July 16, 2009 a video posted on the site “NSFW POA” hinted that a naked blonde woman videotaped through a hotel peephole was a popular sports personality. The next day, Andrews authorized her attorney to issue a statement via PRNewswire verifying that the woman in the video was she and that the video was made without her knowledge or consent. It was determined that the video was originally uploaded to French video site Dailymotion on February 17, 2009, and had been available via Google Search for months.Legal counsel for Andrews and ESPN acted quickly to both remove the video from sites that had posted it and work with authorities in an attempt to locate and prosecute the perpetrators of the privacy invasion.The press release and the video’s subsequent removal spurred tremendous interest in it online, as there was surge in queries for the video on search engines. Two of the top four search queries on Google Search on July 21 were related to the video. Hackers capitalized on the search frenzy by creating fake web sites advertising the video that would instead infect a user’s computer with a computer virus.

TMZ reported that the voyeur video of Andrews was being shopped around.Research continued with the possibility of additional videos, additional victims, and a response from the uploader before his Dailymotion account was deleted/removed.The event has sparked conversation about double standards for female sports reporters, the effects of privacy invasion, and their impacts on the future of female sports reporting.Before the video gained prominence, Andrews was scheduled to return to reporting duties in September.