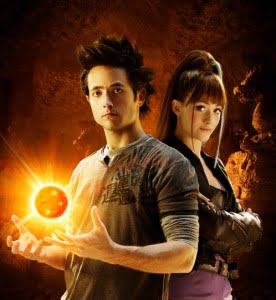 Dragonball: Evolution is an upcoming 2009 American live-action film adaptation of the Dragon Ball media franchise being produced by 20th Century Fox. The story centers around the adventures of the lead character, Goku, from his childhood into adulthood. The film began development in 2002, and is directed by James Wong and produced by Stephen Chow. It is scheduled for release on April 8, 2009. Actor Justin Chatwin was cast as Goku, and James Marsters will be portraying Lord Piccolo, the antagonist of the film.

Goku (Justin Chatwin) goes on a journey to find Master Roshi (Chow Yun-Fat) and gather the seven mystical Dragon Balls before the evil Lord Piccolo (JamesMarsters) can. Along his way, he meets Bulma (Emmy Rossum) who then joins him to help him in his mission. When arriving at Roshi’s place, he is not welcomed with an embrace but has to fight Roshi. Roshi soon learns that Goku is the grandson of Gohan (Randall Duk Kim) and thus trains him to prepare him for theultimate battle with Lord Piccolo to prevent him from collecting the powerful Dragon Balls.

Justin Chatwin as Goku: A powerful warrior who protects the Earth from an endless stream of rogues bent on dominating the universe and controlling the mystical namesakes of the film.

James Marsters as Lord Piccolo: The villain of the film.Marsters explained that this incarnation of the character is “thousands of years old and a very long time ago he used to be a force of good, but [he] got into a bad argument and was put into prison for 2000 years. It got him very angry, and he finds a way to escape and then tries to destroy the world.” Marsters is a fan of the television series, which he described as being “the coolest television cartoon in the last 50,000 years [because] it’s got a Shakespearean sense of good and evil.”Piccolo was intended to look handsome, but Marsters and the make-up artist chose to give him a decrepit complexion, having been trapped for thousands of years. In a promotional video that had been leaked onto the Internet, Piccolo was shown as a figure with a pale yellow-green complexion. However, several set photos and the international trailer reveal that Piccolo’s skin is a much brighter and more noticable green.Although the make-up process tended to take four hours, the first time it took seventeen hours to apply, and Marsters had difficulty breathing.Ron Perlman was offered the role of Piccolo, but turned it down to work on Hellboy II: The Golden Army.

Jamie Chung as Chi Chi: Goku’s love interest.Stephen Chow had been interested in casting Zhang Yuqi, whom he worked with on CJ7, in the part.

Emmy Rossum as Bulma: She aids Goku after her father’s Dragonball is stolen by Piccolo.

Joon Park as Yamcha: A desert bandit that aids Goku and Bulma on their quest.James Kyson Lee auditioned for the role.

Eriko Tamura as Mai: She is a chief enforcer of Piccolo’s and a shapeshifter.

Texas Battle as Carey Fuller: A high school bully. He is an original character created for the film.

Luis Arrieta as Weaver: A classmate and friend of Goku. He is an original character created for the film.

Randall Duk Kim as Grandpa Gohan: The adoptive father and grandfather of Goku who teaches Goku everything he knows about martial arts.

Ernie Hudson as Master Mutaito: Master Roshi’s former sensei and the one who sealed Lord Piccolo away for centuries.

Shavon Kirksey as Emi: A high school friend of Chi Chi.She is an original character created for the film.

One thought on “Dragonball: Evolution”