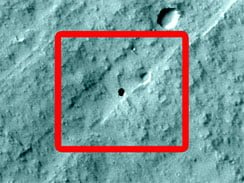 A group of seventh-graders in California has discovered a mysterious cave on Mars as part of a research project to study images taken by a NASA spacecraft orbiting the red planet.

The 16 students from teacher Dennis Mitchell’s 7th-grade science class at Evergreen Middle School in Cottonwood, Calif., found what looks to be a Martian skylight — a hole in the roof of a cave on Mars.

The intrepid students were participating in the Mars Student Imaging Program at the Mars Space Flight Facility at Arizona State University. The program allows students to frame a research question and then commission a Mars-orbiting camera to take an image to answer their question.

The newfound hole on Mars resembled features seen on other parts of Mars in a 2007 study by Glen Cushing, a U.S. Geological Survey scientist.

Cushing suggested that these anomalous pit craters are like skylights — places where a small part of the roof of a cave or a lava tube had collapsed, opening the area below the surface to the sky.