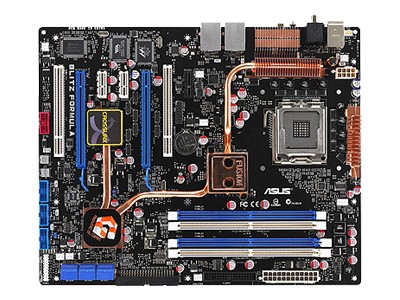 The Republic of Gamers consists only the best of the best. We offer the best hardware engineering, the fastest performance, the most innovating ideas, and we welcome the best gamers to join in. In the Republic of Gamers, mercy rules are only for the weak, and bragging rights means everything. We believe in making statements and we excel in competitions. If your character matches our trait, then join the elite club, make your presence felt, in the Republic of Gamers.

ATI CrossFire™ Technology
ATI´s CrossFire boosts image quality along with rendering speed, eliminating the need to scale down screen resolutions to get the high image quality you want. CrossFire ignites with the higher antialiasing, anisotropic filtering, shading, and texture settings you desire. Adjust your display configurations, experiment with your advanced 3D settings, and check the effect with a real-time 3D-rendered preview within ATI´s Catalyst™ Control Center to rule your CrossFire system.

Dual-Channel DDR2 800
DDR2 is the next generation memory technology to replace the current DDR. With the highest speed up to 800MHz, DDR2 memory provides great performance for 3D graphics and other memory demanding applications.

Fusion Block System
H2O ready: The next step in thermal solution.
The Fusion Block System is a more efficient thermal solution compared to competing followers with complicated looks. It is a hybrid thermal design that combines the ROG´s renowned heatpipe design with the additional ability to connect to a water cooling system. By taking the entire integrated solution into design considerations, the user can enjoy exceptional thermal improvement to north bridge, south bridge, Crosslinx, and even VRM with a single connection. The Fusion Block System is the most versatile, efficient, and the most advanced thermal system there is on a motherboard.
2-Phase DDR2
With the embedded 2-Phase DDR2, this motherboard allows users to reach higher memory frequencies and enjoy better performance. Compared with only one phase solutions, this motherboard ensures longer power component lifespans and higher overclockability due to cooler temperatures and better efficiency..

COP EX
OC in confidence
The COP EX allows overclockers to increase chipset voltages without the worries of overheating. It can also be used to monitor and save an overheating GPU. The COP EX allows more freedom and less constraint for maximum performance achievement.
Voltiminder LED
Friendly reminder on the intentional madness
In the pursuit of extreme performance, overvoltage adjustment is critical but risky. Acting as the “red zone” of a tachometer, the Voltiminder LED displays the voltage status for CPU, NB, SB, and Memory in a intuitive color-coded fashion. The voltiminder LED allows quick voltage monitoring for overclockers.

CPU Level Up
Enjoy up to 40% more performance!
Overclock immediately with OC profile presets. Much more than simple frequency settings, this profile gives gamers compreshensive and detail tuning to frequency, voltages, and even timings to give you a real professional level of overclocking configuration!

Extreme Tweaker
One stop performance tuning shop
Extreme Tweakers is the one stop shop to fine-tune your system to optimal performance. No matter if you´re looking for frequency adjustment, over-voltage options, or memory timing settings, they´re all here!

External LCD Posterr
The new LCD Poster now posts critical POST information in an ever friendly and flexible external display. When system malfunction occurs, the LCD Poster automatically detects device failure and translates the errors on the LCD during POST. Unlike other competing 2 digit displays, users won´t need to read “gibberish” to find out what´s wrong.

3D Game: S.T.A.L.K.E.R
S.T.A.L.K.E.R: Shadows of Chernobyl is one of the most highly-anticipated 3D FPS games released this year. With highly-realistic graphics and gameplay physics, gamers will be tested to their limits when they are ´transported´ to an immersive atmosphere that depicts real-life scenes from Chernobyl.

3DMark® 06 Advanced Edition
The Gamers´ Benchmark 3DMark is the most popular and authoritative
3D benchmark application used by professionals around the world. The 3DMark06 is the latest version in the popular 3DMark series, including advanced SM2.0 and HDR/SM3.0 Shader graphics tests and now including single, multiple core and multiple processor CPU tests as part of the 3DMark score! The accurate performance and image quality diagnostic tool, designed for DirectX®9.0c, provides you with all the information you need to make all other competitors look bad.

AI NOS™
Boost performance when you need it the most!
Applications such as 3D games and video editing demand a huge chunk of system resource. Inject “nitrous oxide” into your CPU! The patented AI NOS™ (Non-delay Overclocking System) technology intelligently detects system load and automatically boosts performance for the most demanding tasks. Unlike other dynamic overclocking techniques, AI NOS™ reacts much faster to satisfy your unending need for speeds .

C.P.R.(CPU Parameter Recall)
When the system hangs due to overclocking failure, there is no need to open the case to clear CMOS data. Just simply restart the system, the BIOS would show the previous setting and then users can amend the CPU setting again.

Dual Gigabit LAN
The integrated dual Gigabit LAN design allows a PC to serve as a network gateway for managing traffic between two separate networks. This capability ensures rapid transfer of data from WAN to LAN without any added arbitration or latency.

High Definition Audio
Enjoy high-end sound system on your PC! The onboard 8-channel HD audio (High Definition Audio, previously codenamed Azalia) CODEC enables high-quality 192KHz/24-bit audio output, jack-sensing feature, retasking functions and multi-streaming technology that simultaneously sends different audio streams to different destinations. You can now talk to your partners on the headphone while playing a multi-channel network games. All of these are done on one computer.

GreenASUS
The motherboard and its packaging comply with the European Union´s Restriction on the use of Hazardous Substances (RoHS). This is in line with the ASUS vision of creating environment-friendly and recyclable products and packaging to safeguard consumers´ health while minimizing the impact on the environment.