Taipei, Taiwan, April 4, 2008 – Catering to users who require extreme graphical support and robust performance, ASUS, leading producer of motherboards, has today released the new ASUS Crosshair II Formula Motherboard. This powerful motherboard includes innovative technologies like CPU Level Up, Hybrid SLI and 3-Way SLI for the best performance and graphical support. It is also ready for AMD® Socket AM2+ Phenom™ FX / Phenom X4 / Phenom X2 / Athlon™ X2 / Sempron™ and legacy AM2 processors; and features up to 5200 MT/s via HyperTransport™ 3.0-based system bus speeds for AM2+ CPUs. 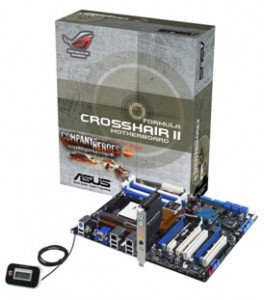 A Simple Click for Instant Upgrades
ASUS´ exclusive CPU Level Up technology makes it easy to upgrade the CPU performance without additional costs. This innovation allows users to easily obtain enhanced performances in just three easy steps. Firstly, users need to enter the BIOS. Next, they simply need to choose the processor they wish to overclock to. Finally, all they need to do is reboot. With ASUS´ innovative technology, the motherboard will now do the rest, and users can instantly start enjoying higher performances and better frame rates. Overclocking has never been this easy! This innovative technology has also been listed on the Ten Best Technologies and Trends of 2007 at the reviewing site Extremetech.