Appliance Reviews: All About the GE Monogram Collection

General Electric (GE) has a long line of appliances. Ranging from refrigerators to dishwashers to ventilation systems, most GE appliance reviews in various consumer magazines and websites are mostly favorable. It’s no surprise either, as the company GE has been in business for quite a white. They are one of the largest companies in the world, and are rated highly in the Fortune 500 ranking. Successful companies produce successful products. 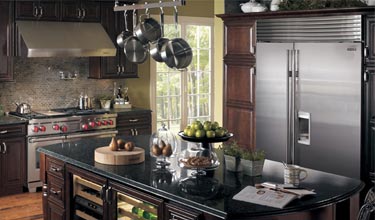 With this success in mind, the GE Monogram appliance line has taken another step toward making better household appliances in order to ensure the future of the company, as well as creating a new future of machines in the household. The Monogram Collection was designed to be both stylish in order to meet your home décor needs and energy efficient in order to preserve resources and keep the bills as low as possible.

Taking a specific look at one of the GE Monogram appliances, reviews for the ZDWC240NBS Wine Cooler are spotty at best. The product is well crafted and looks stylish, but the main complaint is the lack of space in between the shelves. Consumers are unable to place certain size wine bottles. This makes it hard to actually cool wine bottles, which is the main purpose of this appliance.

One GE Monogram appliance that has received favorable reviews though is the ZSC2001FSS Advantium Electric Single Oven. It operates quickly and efficiently with its special cooking process: speed cooking by light. This allows the oven to cut cooking time by one-eighth of a conventional oven. And this technology isn’t microwave cooking, although the oven can double as a 950 watt microwave if you want to reheat those leftovers from dinner. Perhaps its only downside is the hefty price tag.

Going over one more appliance, the GE Monogram Undercounter Beverage Center ZDB24A is another of those products with wishy-washy reviews. It holds that sleek elegant look to it, as all Monogram appliances do, but the reviews that give it a bad rating had a unified complaint; the drinks aren’t cold enough. Now, the name is somewhat misleading, being a beverage center and all, but one could at least expect it to do something more than look neat and pretty.

It’s very clear that the GE Monogram appliance line stands out from the regular line due to the effort put into the appearance and aesthetic design. However, if you’re looking to purchase one of these babies, make sure to do a little research because your new kitchen toy may not function as expected.