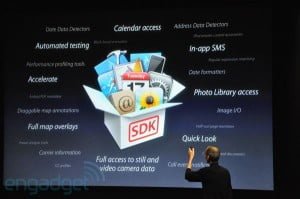 iPhone OS 4’s new multitasking offers users a new way to quickly move between apps, and provides developers seven new multitasking services to easily add multitasking features to their apps. These services include background audio, so apps like Pandora can play music in the background, and VoIP, so VoIP apps can receive a VoIP call even when the iPhone is asleep or the user is running other apps. iPhone OS 4 provides multitasking to third party apps while preserving battery life and foreground app performance, which has until now proved elusive on mobile devices.

Folders help users better organize and quickly access their apps. Simply drag one app icon onto another, and a new folder is automatically created. The folder is automatically given a name based on the App Store category of that app, such as “Games,” which the user can easily rename. Using folders, users can now organize and access over 2,000 apps on their iPhone. Users can also create and manage iPhone folders on their Mac® or PC using iTunes® 9.2.

iPhone OS 4 delivers the best mail experience on a mobile phone with its new Unified Inbox, allowing users to see messages from all their email accounts displayed together in a single inbox. With just a few taps, users can quickly switch between inboxes to see messages from any single account. In addition, users can now thread their messages by conversation, making it easier to stay on top of email discussions, as well as open email attachments with compatible apps from the App Store.

iAd, Apple’s new mobile advertising platform, combines the emotion of TV ads with the interactivity of web ads. Today, when users click on mobile ads they are almost always taken out of their app to a web browser, which loads the advertiser’s webpage. Users must then navigate back to their app, and it is often difficult or impossible to return to exactly where they left. iAd solves this problem by displaying full-screen video and interactive ad content without ever leaving the app, and letting users return to their app anytime they choose. iPhone OS 4 lets developers easily embed iAd opportunities within their apps, and the ads are dynamically and wirelessly delivered to the device. Apple will sell and serve the ads, and developers will receive an industry-standard 60 percent of iAd revenue.

The iPhone OS 4 beta release includes a developer preview of Game Center, which contains a set of APIs that allows developers to create apps with the ability to invite friends to play a game, start a multiplayer game through matchmaking and track achievements and compare high scores on a leader board. Apps created with GameKit APIs will work with Game Center, Apple’s new social gaming network available to iPhone and iPod touch users later this year.

New enterprise features in iPhone OS 4 include improvements in security, scalability and compatibility. The new Mobile Device Management service can be integrated with third party servers to wirelessly configure, query and even wipe or lock managed iPhones, and iPhone OS 4 enables enterprises to securely host and wirelessly distribute their own in-house developed apps to employees. The new Data Protection feature uses a user’s passcode as an encryption key to protect mail messages and attachments stored on the iPhone. iPhone OS 4 now provides the option to set a longer, more complex passcode, making iPhone and its data even more secure. iPhone OS 4 allows IT managers to set up multiple Exchange ActiveSync accounts, is compatible with Exchange Server 2010 and includes support for forthcoming SSL VPN applications from Juniper Networks and Cisco.

Today, more than four billion apps have been downloaded from the revolutionary App Store and more than 185,000 apps are available to consumers in 90 countries. Over 85 million iPhone and iPod touch users around the world can choose from an incredible range of apps in 20 categories, including games, business, news, sports, health, reference and travel.

*Some features may not be available on all products. For example, Multitasking requires iPhone 3GS or third generation iPod touch (late 2009 models with 32GB or 64GB).

Apple ignited the personal computer revolution with the Apple II, then reinvented the personal computer with the Macintosh. Apple continues to lead the industry with its award-winning computers, OS X operating system, and iLife, iWork and professional applications. Apple leads the digital music revolution with its iPods and iTunes online store, has reinvented the mobile phone with its revolutionary iPhone and App Store, and has recently introduced its magical iPad which is defining the future of mobile media and computing devices.