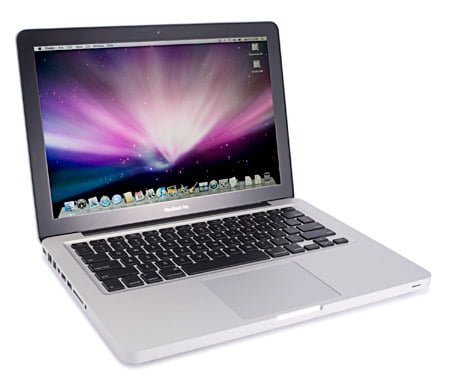 After all the whining, the bickering, and the constant remarks about how Windows-based laptops have this and that and cost so much less, Apple, a company known to make its own rules, is finally letting down its guard. The lovable MacBook Pro 13-inch (now with the “Pro” moniker) has brought back the FireWire port, lowered its price, and for the first time in the company’s history, added the elusive SecureDigital (SD) slot. Mind you, we’re not ignoring the bigger and now-nonremovable battery, which scored an admirable 4 hours 44 minutes on our battery tests, but the other improvements are signs that Apple is finally paying attention to its suggestion boxes. Indeed, it’s a great time to be shopping for a new Apple laptop—especially this one, which earns our Editors’ Choice.

From a design standpoint, current MacBook 13-inch (Aluminum) owners shouldn’t be too envious—you can hardly tell the earlier model apart from the new one. The MacBook Pro 13-inch measures only an inch thick, despite having a built-in optical drive, and uses the same Unibody enclosure carved out from a thick slab of aluminum. These are the fundamentals—a metallic chassis and a thin design—that have contributed to Apple’s success. Ultraportables like the Dell Adamo and the Sony VAIO VGN-Z590 have employed similar tactics but were deemed too expensive. Meanwhile, systems like the HP Pavilion dv3z, the Lenovo IdeaPad U330, and the Gateway UC7807u may be cheaper, but their chassis are too thick and “plasticky.” The Acer Aspire 3935 (6504), with its thin metalloid chassis, is the only one that can give the MacBook Pro 13-inch a run for its money.